Though NASA has abandoned its moon base ambitions, that doesn’t mean we won’t see a permanent lunar presence sometime in... 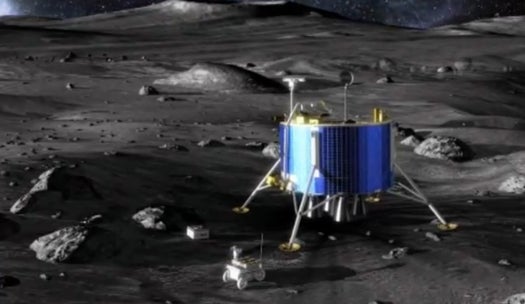 Though NASA has abandoned its moon base ambitions, that doesn’t mean we won’t see a permanent lunar presence sometime in the foreseeable future. Japan has plans to establish a robot moon base on the moon by 2020, with an initial robotic landing by 2015. Now the European Space Agency is upping the ante, announcing plans to put a mammoth lunar lander on the moon by the end of the decade, complete with a robotic rover that will study the site in anticipation of eventual human habitation.

European aerospace giant EADS Astrium has been granted a $8.5 million contract to develop the lander and constituent surface roving robot, which together will weigh more than 1,500 pounds. The mission will be aimed at the lunar south pole, a region with sufficient sunlight to allow both lander and rover to operate for up to six months on solar power without experiencing prolonged darkness.

But the rover won’t be the only robotic aspect to the mission. Without a human onboard to make the kind of cavalier landing usually only attempted by those with “the right stuff,” the lander will have to navigate to the right location, survey the terrain below, and determine its own landing site. That means the systems on board won’t just be taking orders from operators on earth, but actively avoiding obstacles and simultaneously evaluating various landing sites so the lander can choose the most desirable one.

Once on the ground, the lander will deploy a small rover equipped with a small suite of scientific instruments. But unlike other planetary rovers designed to carry out geological or atmospheric research, this mission will be focused narrowly on future human exploration. The ESA wants to sample minerals in the soil at the southern pole, as well as determine if there are sufficient reserves of water ice hiding in the shadows of craters.

The initial grant will fund a full study of the mission’s feasibility, including its final cost which is expected to be in the hundreds of millions. If the initial review passes muster with Europe’s space ministers in 2012, the mission could launch aboard a Soyuz rocket by the end of the decade.