When it comes to precision sensing, secure battlefield communications, and global positioning systems, DARPA knows what time it is. However,... 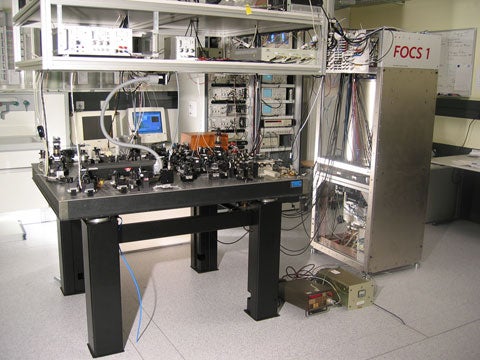 When it comes to precision sensing, secure battlefield communications, and global positioning systems, DARPA knows what time it is. However, a lack of coordinated clocks is a hindrance on the battlefield and elsewhere. That’s why DARPA has put its feelers out for technology that could lead to portable atomic clocks that are miniature, ruggedized versions of the massive devices that keep standardized time in laboratories around the world.

DARPA’s Quantum Assisted Sensing and Readout (QuASAR) program aims to take high-performance atomic clocks like the National Institute of Standards and Technology’s NIST-F1, the massive room-sized clock housed in a lab in Boulder, Colo. Doing so won’t be any easier than many other challenges DARPA brings to the table, but the agency thinks advances in nanoelectromechanical systems (NEMS) resonators and nitrogen-vacancy (NV) centers in diamonds that exhibit single-atom-like properties could create a close analog to an atomic clock in a miniature, portable package.

Atomic clocks don’t lose seconds or even fractions of seconds over time (well, that’s not entirely true, but time lost is negligible; NIST-F1 will neither gain nor lose a second in 60 million years), and that opens up major possibilities for syncronisity. Such portable clocks would allow for communications systems that are far more secure less susceptible to jamming and GPS positioning that is unrivaled. DARPA also thinks they might lead to precision sensors unrivaled in resolution and sensitivity.