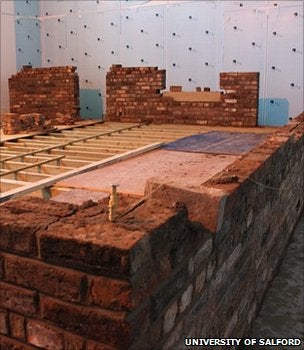 Older homes have a certain charm, but they’re notoriously inefficient — they’re drafty, under-insulated, and equipped with old, energy-guzzling appliances. In an effort to study potential improvements, British researchers are building an “energy house” inside a special three-story shell that can generate rain, snow, wind and varying humidity levels.

By studying the different ways the house consumes energy, researchers hope to come up with ways to improve efficiency and reduce carbon dioxide emissions, BBC reports. The terrace-style home, designed by researchers at the University of Salford in Manchester, is thought to be the first of its kind in Europe.

Construction is only a few weeks in, but a virtual tour of the house shows a sharp-looking brick building with nice bay windows, stylish bathroom sinks and energy-efficient appliances. It is designed to resemble the two-up, two-down terrace-style homes that make up about 15 percent of UK dwellings, the researchers say. About 2 million Britons live in homes like that, which were mostly built prior to 1920.

The home’s snow globe shell can generate whatever conditions the researchers want, unlike other test properties that depend on Mother Nature.

In addition to creating the weather, the researchers will work with psychologists, health experts and sociologists to come up with sustainable solutions. They hope to study whether the use of certain colors and wall coverings affect how we perceive temperature; whether smart meters showing real-time energy use will affect behavior; and if game consoles like the Wii could be used to convert residents’ physical energy into a home power source, for instance.

The house is expected to be completed in February.