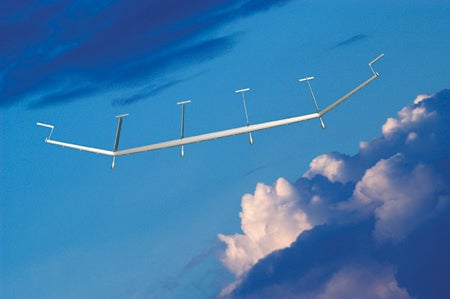 As the winner of Darpa’s Vulture II program, the plane really only has to fly for one to three months by 2014, however.

SolarEagle comes from Boeing’s Phantom Works, the same design team that brought us the hydrogen-powered Phantom Eye, which will fly at roughly the same altitude for four days. Like its brethren, SolarEagle is a bit odd-looking, but that is mostly because its 400-foot wing is designed to increase solar power and aerodynamic performance.

The plane will harvest solar energy throughout the day, storing energy inside fuel cells that will be drained overnight. It comes equipped with efficient electric motors, according to a Boeing news release.

Just this summer, a Swiss team proved a manned solar-powered plane can fly for 24 hours straight. An unmanned five-year trip will be no mean feat, considering the world’s longest-endurance drone, the Global Hawk, can fly for about 40 hours.

Boeing says the SolarEagle will carry a 1,000-pound payload — not enough to hoist a bomb to the stratosphere, but plenty to carry a suite of surveillance equipment.