A massive collection of spacecraft parts, dead satellites, and spent rocket stages circle high above the Earth in a sort... 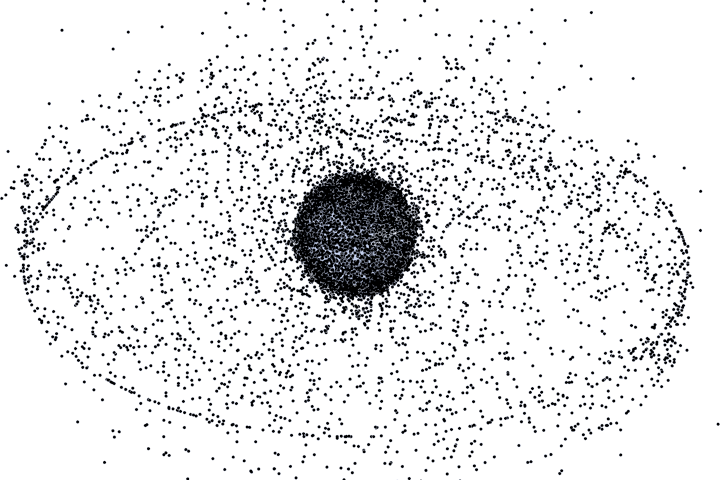 A massive collection of spacecraft parts, dead satellites, and spent rocket stages circle high above the Earth in a sort of “floating landfill.” According to recent estimates, about 4 million pounds of space junk currently orbit the Earth, including some 20,000 pieces of debris larger than 10 centimeters.

But a new U.S. Air Force satellite scheduled to launch Saturday night from Vandenberg Air Force Base will provide the first full-time, unobstructed view of both space debris and the hundreds of active satellites orbiting the Earth. The Space-Based Surveillance Satellite (SBSS) spacecraft includes a sensor mounted on a pivoted support that will allow controllers to move the camera quickly without having to reposition the entire spacecraft. Its flexible architecture also provides the option to add more satellites and sensors later.

Pieces of space debris—even objects as small as paint flecks—can pose serious threats to commercial and military space assets, such as satellites that provide communications, navigation, and weather forecasting capabilities.

Until now, the Air Force has relied on a global ground-based network of radar and optical telescopes to monitor about 1,000 active satellites, as well as space debris. But the telescopes only perform during clear conditions and are limited by weather and atmospheric interferences. In addition, not all radar stations can detect objects in deep space orbit—about 22,000 miles above the Earth. With its wide field-of-view, the SBSS will give controllers the ability to find and track objects in deep space more quickly and accurately than previous sensors.

Boeing is responsible for the overall SBSS system, including the ground system and initial mission operations; Ball Aerospace designed the spacecraft and sensor.

Boeing and Ball completed final testing of the SBSS satellite and ground system earlier this week, and the launch is scheduled for 12:41am EDT on September 26 (9:41pm PDT on September 25). Several previous launch dates were delayed this year due to technical issues.