Japan’s newest RoboCop-looking humanoid robot practices yoga, tracks faces and objects and, in what seems to be a robo-requirement these … Continued 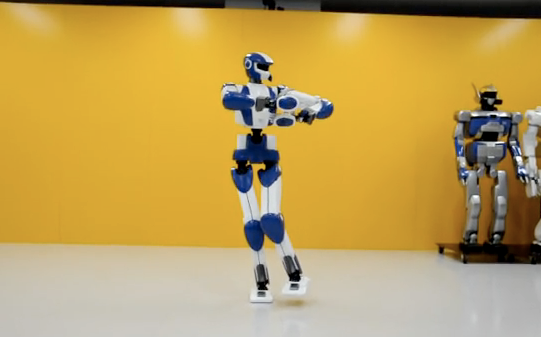 Japan’s newest RoboCop-looking humanoid robot practices yoga, tracks faces and objects and, in what seems to be a robo-requirement these days, pours drinks.

The industrial HRP-4 robot was designed to coexist with people, and its “thin athlete” frame is meant to be more appealing, according to Kawada Industries, which built the robot with Japan’s National Institute of Advanced Industrial Science and Technology.

The 5-foot-tall, 86-pound robot is a deliberately downsized version of its larger sibling, the HRP-2. Kawada first developed HRP-2 seven years ago, and wanted to design an updated version, according to a press release.

HRP-4 has 34 degrees of freedom and can move its arm seven ways. It can carry about a pound in each arm. All joint motors are less than 80 watts, as CNET reports. A small laptop can be installed in HRP-4’s back to increase its data processing capabilities.

HRP-2 bots have already been proven helpful around the house, pouring drinks and washing the dishes. After doing your chores, this graceful yoga-bot might even inspire you to get off the couch and get some exercise. Check out its moves below.