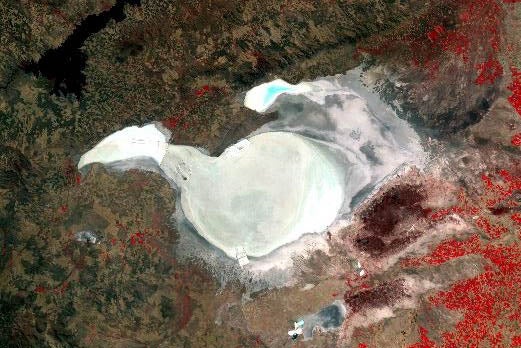 Ordinary Earthbound cameras can use a nice low-tech method for setting white balance: hold up a white sheet of paper and shoot it. Now a team of British scientists are white-balancing satellite cameras that photograph the Earth for the first time, using an entire Turkish lake.

Scientists from around the world will gather at a dry lakebed for the next two weeks to measure the reflectance of Lake Tuz, which dries in the summer to a quotation-mark-shaped pile of salt. They will take ground-based measurements at the scorching site, where temperatures can reach 122 degrees during the day, and compare them to satellite readings.

White-balance is important for proper color rendition — you have to adjust your camera settings to avoid a blue or orange hue, depending on whether the light source is warm, like the sun, or cool, like a fluorescent light.

This is important for satellites as well, because observation satellites measure very subtle changes on the Earth to track climate change, coastal degradation and natural disasters. If the instruments aren’t calibrated right, the measurements won’t be, either. Since satellite instruments degrade once they get to space, it would be helpful to check them against some kind of standard to correct for any inaccuracies.

Lake Tuz, in southern Turkey, was just named one of eight sites worldwide that can be used as an international reference standard to calibrate and validate satellites’ sensors.

Scientists from the National Physical Laboratory in the UK are leading the international effort. Their lake measurements are the first step toward establishing a calibration service for Earth observation satellites.

You can follow the scientists’ progress on this blog.