Egyptologists are hoping some 21st-century tech will help them unlock secrets from 4,500 years ago. They’re using a robot to... 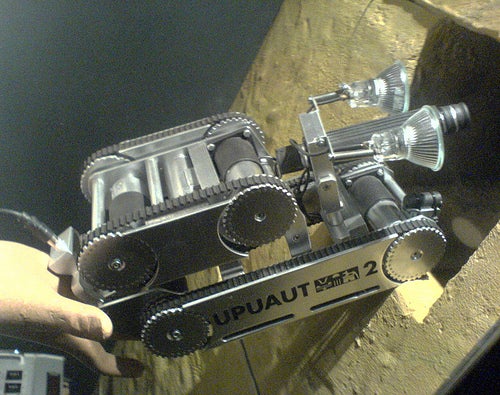 The Upuaut-2 bot was used in an earlier exploration of the Queen's Chamber. Michael Studt via Heritage Key
SHARE

Egyptologists are hoping some 21st-century tech will help them unlock secrets from 4,500 years ago. They’re using a robot to explore the Great Pyramid of Giza.

The robot will traverse two unexplored shafts leading from the Queen’s Chamber in the pyramid. Nobody knows where the shafts, which were discovered in 1872, lead.

Known as the Djedi project, after the magician whom the Egyptian king Khufu consulted when planning his pyramid, the robot will be able to drill through a secret door in the pyramid’s innards to see what lies beyond.

A robotics team from Leeds University in the UK is working with Egypt’s Supreme Council of Antiquities to design the tomb bot, which is a follow-up to an earlier robotic mission that found the secret door in the first place.

The Pyramid of Khufu, after the king who built it around 2,560 BC, is the last remaining wonder of the ancient world. It involves a series of passageways and two rooms at its center, called the King’s Chamber and the Queen’s Chamber. Two shafts rise from the King’s Chamber at 45-degree angles toward the sky — as the Independent reports, they’re thought to be a passageway to the heavens.

The Queen’s Chamber has two shafts too, but they don’t lead to the outside of the pyramid.

In 1992, researchers sent a camera up the shaft and found it was blocked by a limestone door with copper handles. Ten years later, researchers drilled through the door, hoping to unlock a treasure trove of artifacts — but they found yet another door about 8 inches away. The Djedi project will drill through the second door and, researchers hope, follow the shaft to its end.

The team hopes to send the robot through the door by the end of the year, the Independent reports.

Robert Richardson, of the Leeds University School of Mechanical Engineering, says the team will continue the expedition until they reach the end of the shafts, and that they have no preconceptions about what they’ll find.

One can only hope it will be something out of this world.