It’s been a rough week troubleshooting the ISS, but the third time is a charm; today’s emergency spacewalk to replace... 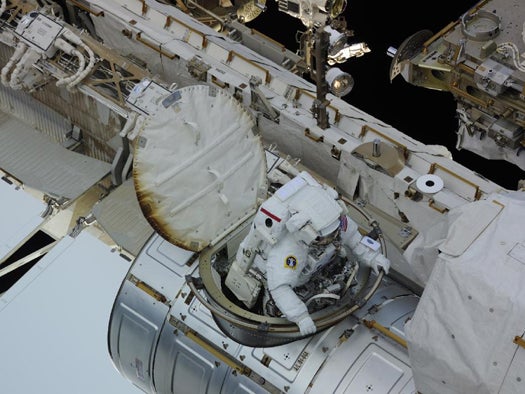 It’s been a rough week troubleshooting the ISS, but the third time is a charm; today’s emergency spacewalk to replace the faulty cooling system aboard the International Space Station went swimmingly, and Mission Control hopes to have the station running at full speed again by Thursday.

The 780-pound pump circulates ammonia through a heat exchange system that cools many of the research projects aboard the ISS, but replacing the faulty unit has been a process for Douglas Wheelock and Tracy Caldwell Dyson, two of the three American aboard the ISS. During the first attempt at moving the pump on August 7 an ammonia leak brought the spacewalk to an end as engineers on the ground hashed out the problem, adding another spacewalk to the schedule.

The second spacewalk went more smoothly and the duo was able to get the pump free without further leakage problems. Today’s seven-and-a-half hour spacewalk went like clockwork as Wheelock angled the huge pump into place with the help of the ISS’s robotic arm. He bolted the unit into place while Caldwell Dyson reattached the electrical connections. After connecting the fluid lines, the unit seemed to be working properly. A series of tests and checks over the next few days will ensure there are no further problems before Mission Control brings the station back up to capacity by the end of the week.

A fourth spacewalk will be needed at some point to move the failed fuel pump to a more secure position on the ISS’s exterior, but it’s unclear if the current crew will be asked to perform that chore or if it will be left to a future group of ISS inhabitants.

The faulty pump, one of a duo, failed on July 31. Since then the ISS has been running at half capacity, leading the crew to power down some research experiments aboard the ISS until full cooling capacity can be restored. Living conditions never deteriorated and the crew was never in peril.