Taking Cues From Medical Tech, Big Oil Could Use Nanoparticles to Hunt for Leftover Crude in Spent Wells

You can’t throw a rock in the realm of biotech right now without hitting some scheme or another for tapping... 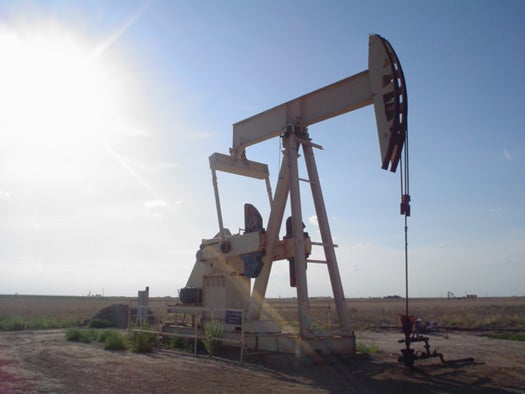 You can’t throw a rock in the realm of biotech right now without hitting some scheme or another for tapping the unique properties of nanoparticles to hunt tumors, target drug delivery, or monitor the body internally for specific biomarkers. But a perhaps unlikely field of scientific exploration is also tapping these nano-biotechnology applications to search for the elusive hydrocarbons that are its lifeblood: the oil industry.

In some ideological camps, there is nothing worse than drilling for oil. But while opinions on that issue are mixed, most would likely agree that drilling into the Earth only to leave behind up to half the oil that resides down there is extremely wasteful. Yet that’s often what happens when the free-flowing oil from a well is depleted; oil clinging to sediments in rock formations or stuck within porous rock structures apart from the primary reservoir goes unused because it’s terribly difficult to locate and extract.

In medical science, researchers have turned to nanotech to track down elusive elements within the body and to deliver drugs to highly specific areas. Now, the oil industry is doing the same, hoping to use nanoparticles to locate and extract oil deep within exhausted wells.

One method under development at Rice University in Houston involves coating nanoparticles with hydrocarbon-philic compounds that also react with the oil. By scattering nanoparticles in water that is pumped into dying wells, engineers could then examine the particles left in the water that comes back up to determine if there are still large pockets of oil hiding in porous rock below. Another method under development at Penn State exploits the saline gradient between the fresh water pumped into wells with the briny water naturally occurring within them, using the difference in salinity to propel the particles forward into the formation where a coating on the particles make it actively seek out oil hiding in the rock.

But while these methods would help engineers figure out if there is remaining oil underfoot, it won’t help them get at it. For that, researchers at the University of Kansas are working on an idea very similar to the nanocapsule drug delivery systems used in medicine. Such methods coat a drug-filled nanocapsule with a coating that only lets it release its pharmaceutical payload in the presence of, say, a cancer cell. Similar nanocapsules filled with a detergent that causes oil to break free from sediment could be used to seek out hydrocarbons and release detergents onto them right where they are hiding, releasing oil into water that can then ferry it to the surface.

None of these methods is ready for the oilfield just yet, but as the technology progresses — not just in oil exploration labs, but also in biotech laboratories — nanoparticles could help oil companies unlock the estimated 360 billion barrels of oil laying unused in U.S. oil wells alone without resorting to further drilling.