In 2016, NASA and the European Space Agency will launch the first-ever joint U.S./Euro mission to Mars, and Tuesday they... 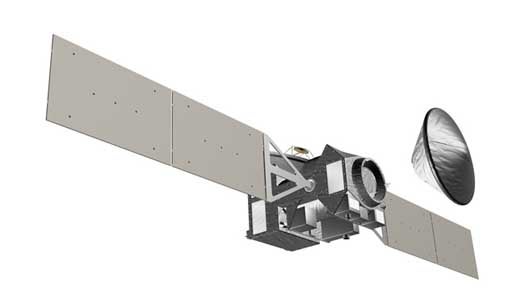 In 2016, NASA and the European Space Agency will launch the first-ever joint U.S./Euro mission to Mars, and Tuesday they unveiled exactly what kind of toys the ExoMars Trace Gas Orbiter will have on board. Among the highlights: the Mars Atmospheric Trace Molecule Occultation Spectrometer (MATMOS) that can detect concentrations of gas down to parts per trillion.

Unlike most of the current missions orbiting and roving Mars, ExoMars’s mission is to focus on the atmosphere of the planet with a suite of instruments that can take measurements 1,000 times more sensitive than those by previous orbiters. Among those instruments are an IR-sensitive radiometer that can measure water, dust, and other particulate matter in the atmosphere continuously and a four-color camera that will snap images of space above the planet as the other instruments take measurements. Another camera will simultaneously capture wide-angle images of the entire planet so researchers have visual data to go along with their spectrometer data.

As for spectrometers, there will be two aboard ExoMars (including MATMOS) that can detect molecules at extremely low concentrations. Researchers want to know exactly what Mars’s atmosphere is made of to help them determine if there ever was, or ever could be, life there. Of particular interest is methane because it can come from both geological and biological sources. Researchers first recognized it there in 2003, and they would like nothing more than to determine its origin.

Researchers know there’s not a lot of it there, but MATMOS and company should be able to find whatever methane is present. They estimate that the amount of methane produced by the microbes in the bellies of just three cows would be observable by MATMOS even distributed through the entire Martian atmosphere.

ExoMars will orbit the planet focused on the horizon, collecting molecular data as light streams straight through the atmosphere during orbital sunrise and sunset. But the 2016 mission isn’t purely focused on the space above the Martian surface. While ExoMars is put into orbit, the carrier craft will also send a vehicle to the surface to conduct experiments on the ground.