It sounds a bit Google-ey, what with all the data mining across the Web and all that, but it’s Microsoft... 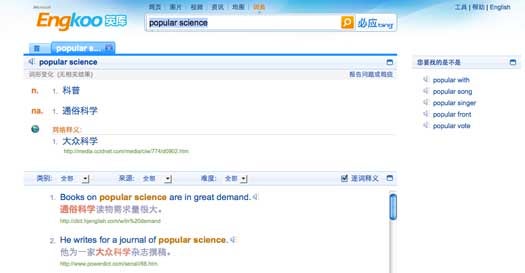 It sounds a bit Google-ey, what with all the data mining across the Web and all that, but it’s Microsoft researchers in Beijing that are crafting an online Chinese-to-English dictionary that could become a model for language learning tools bridging any two tongues. Engkoo.com pulls its database from the Web itself, cross-referencing sites that exist in both English and Chinese, searching existing online dictionaries, and mining other sources to create a rich resource for both learning and translation.

By drawing on the ever-evolving organism that is the Internet, Engkoo (loosely meaning “English vault” in Chinese) should be able to stay abreast of changes in colloquialisms and idioms in both the source language and the one it is translating to. In theory, it should also be able to catch errors or mistranslations easier, since an error is unlikely to be prevalent across the entire Web.

When a user searches for a word or sentence in either language – Microsoft plans to adapt the system for other languages but this initial phase is focused on Chinese-to-English translation – the software driving Engkoo searches through the database for the relevant data and draws upon statistics to translate as accurately as possible. Where possible it links to the sources where it drew the initial data from and often can provide example sentences for a word or phrase.

Engkoo is also a multimedia experience. Computer generated audio translations exist for many English words and sentences to help Chinese speakers with their pronunciation, and researchers are cultivating a video dictation library so users can see the way native speakers’ lips move as they enunciate.

Next up? Ultrasound images that show the movement of the tongue inside the mouth, a critical step in learning pronunciation but one that is often hidden from plain view. Researchers are already gathering ultrasound data for the library, but those of you who find that kind of imagery less-than-savory, worry not; the black-and-white ultrasounds will be converted into cartoon animation to make them a bit more – how do you say? – palatable.

There’s also a mobile app in the works that will run on Windows phones – other mobile OS types are being considered – that allows for translation on the go. Which means perhaps we’re seeing the first real baby steps toward the universal translator you can keep in your pocket for real-time translation of any language into your own.