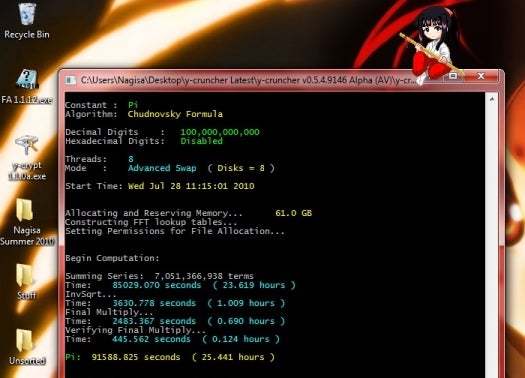 Shigeru Kondo spent some $18,000 to build a desktop Windows computer that, over the course of three months, shattered the world record for calculating pi. Running in the 54-year-old system engineer’s home, where he lives with his wife and mother, the machine calculated pi to 5 trillion decimal places, nearly double the previous record of 2.7 trillion set by French programmer Fabrice Bellard late last year.

Kondo collaborated via email with Alexander Yee, an American computer science student, to do the calculation. Yee provided the software, called y-cruncher, which ran on Kondo’s homemade machine under Windows Server 2008R2. The computer was built out of individually sourced parts, including Intel processors and 20 hard drives.

Kondo tells AFP that he was alone in his room at midnight when the 5-trillion mark was reached. His wife and mother were asleep and, when he told them, expressed “no particular feelings” about the monumental achievement.