After one failed attempt to remove a broken cooling pump on Saturday, a second attempt has succeeded. In a seven-and-a-half-hour... 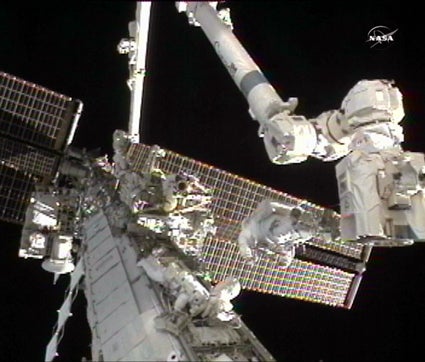 After one failed attempt to remove a broken cooling pump on Saturday, a second attempt has succeeded. In a seven-and-a-half-hour spacewalk, Doug Wheelock and Tracy Caldwell Dyson managed to unhook the ammonia line that was spewing frozen NH3 crystals last time, then pry off the broken pump with a grapple bar. Whew.

A third spacewalk is scheduled for no later than Monday to install the spare pump. After that, one more spacewalk may be required to tidy up after all the other spacewalks.

In the meantime, the cooling system is limping along at half strength, while the side of the ISS that faces the Sun reaches 250 degrees. As Clay Dillow pointed out on Monday, after the replacement pump is installed, there will be only one additional spare, which is worrying. No currently available spacecraft is large enough to carry additional spares to the station, except the Shuttle, which is being decommissioned this year.