In a Grand Romantic Gesture, WISE Telescope Captures a Cosmic Flower in the Unicorn Constellation

By any other name, this deep space pic of the Rosette nebula is still beautiful. By snapping images at four... 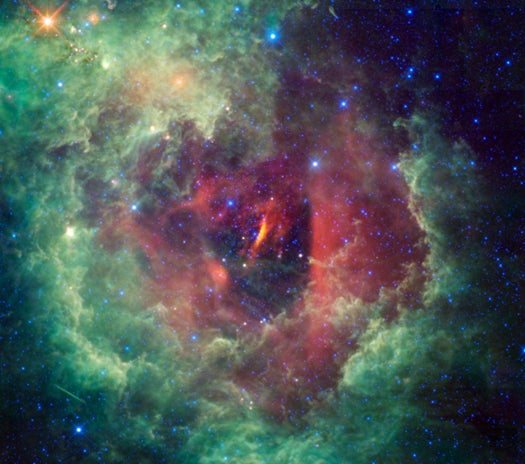 By any other name, this deep space pic of the Rosette nebula is still beautiful. By snapping images at four different wavelengths in the infrared spectrum, NASA’s Wide-Field Infrared Explorer (WISE) recently peered deep within the constellation Monoceros, or Unicorn, to capture this floral swirl of gas, dust, and stars some 4,500 to 5,000 light years away.

Located within the Milky Way, the Rosette nebula – also known as NGC 2237 – is a star-forming cloud that is a favorite waypoint for amateur astronomers because it can be seen fairly easily with a small telescope or even a set of good binoculars. The hole in the middle of the swirling cloud is caused by massive amounts of stellar radiation coming off the stars that erode the particles there. The result is the romantic, floral-esque orientation seen above.

The colors are representative of different elements within the nebula. WISE captured the shot – it’s actually a composite – using all four of it’s IR cameras, so the blue and cyan represent wavelengths of 3.4 and 4.6 microns, representing light from the stars, while the greens and reds indicate light from warm dust at 12 and 22 microns respectively.

That bright green streak in the lower left is actually an astronomical photo crasher; as WISE was snapping the multiple images that make up this composite, it captured the trail of another satellite.