Americans have a prison problem — namely, we’ve got a whole lot of people in prisons and that’s a huge... 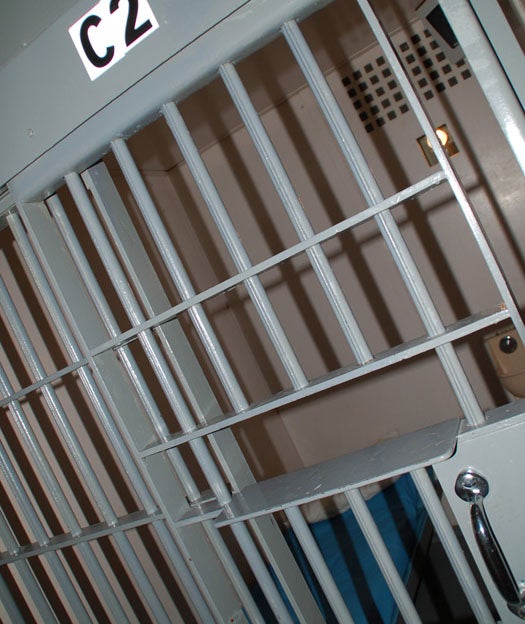 Americans have a prison problem — namely, we’ve got a whole lot of people in prisons and that’s a huge drain not only on hard money in our public coffers, but on man-hours lost by both the inmates and the people who spend their productive hours keeping an eye on them. But Graeme Wood, writing in The Atlantic, describes a new prison paradigm that would take the economic – and, for the inmates, psychological – duress out of our penal system: let most of the inmates go free. Then use technology to monitor their every move.

This brave new world of free-range felons is highly reliant on technological solutions, but, advocates argue, it would take tremendous strain off a failed prison system into which decent people who’ve fallen afoul of the law (often related to illegal substances) come out of prison hardened, more violent, and with a slew of new friends from their time spent inside. By keeping pettier criminals out of jail, we keep them working, keep them among positive influences like family (a relationship for which the benefits are often reciprocal), and keep them out of trouble.

How does the system keep them out of trouble? The current parole/probation system is also something of a failure, with overworked officers trying to ensure that too many felons keep their noses clean, day in and day out. Technological solutions like the ExacuTrack from Anderson, Indiana-based BI Incorporated can do that automatically. The combination ankle bracelet and GPS transponder (worn on the waist like a cell phone) keeps real-time tabs on its clientele, making sure they do what they’re supposed to do and stay away from places where the state doesn’t want them.

For instance, a parole officer could detail a rigid routine for a free-range prisoner, ensuring he adheres to his work schedule (we’re using the masculine “he” here – in the majority of cases it’s accurate), reports for community service, and stays the hell away from schools or that watering hole down on 2nd Street where the whole trouble started in the first place. Not only that, but the tracking tech can make sure he stays clear of other felons wearing the device, but also from further crime – who would recruit a partner in crime who has a GPS tracker attached to his belt, anyhow?

BI’s technology is already capable of monitoring the free-range felon’s sweat for traces of alcohol use (what’s up, LiLo!) if necessary, but future versions could also monitor for other substances to ensure state charges stay off the hard stuff or on their meds. And as other wireless technologies progress, so too could the monitoring tech, for instance checking for proximity to the kinds of products the “prisoner” has a habit of stealing.

It sounds intrusive, but when citizens are convicted of felonies they do give up some rights. And given that the alternative is to sit in a prison cells, many would likely leap at the option to remain on the outside as a productive, yet partially restricted, member of society. Of course, we’ll always need places to put those citizens that are true menaces to society, but given that American has more than 2 million people wasting away behind bars right now in the U.S. – a population the size of Houston, as Wood points out – the idea of letting our less dangerous criminals walk among us doesn’t seem so bad.