Researchers at GE Global Research are working with DARPA funding to tap butterfly tech to make a new breed of... 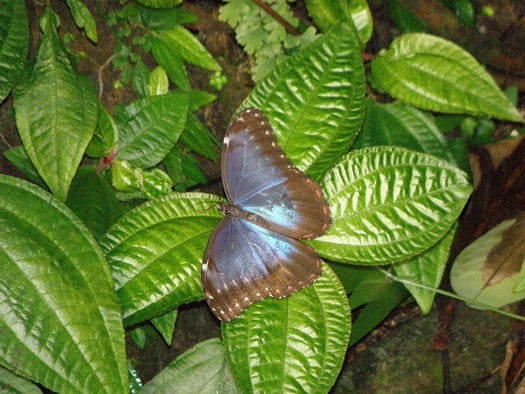 Researchers at GE Global Research are working with DARPA funding to tap butterfly tech to make a new breed of sensors that could detect everything from explosives, to chemical attacks, to disease biomarkers on a person’s breath.

The research team discovered a few years ago that the scales on Morphos butterfly wings have extremely fine-tuned sensing abilities that can pick molecules out of the atmospheric noise. Nano-level structures underneath the colorful scales on the butterflies’ wings react to different vapors, changing the spectral reflectivity of the wings depending on what they are exposed to.

DARPA wants GE to engineer highly specific, highly sensitive sensors that can do the exact same thing. Scientists will attempt to recreate those nanostructures from scratch, an undertaking that should teach GE researchers a lot about nanotech construction even if it doesn’t yield the desired sensors. But if successful, DARPA should come out of the deal with sensors ranging from just 5 microns up to the size of an ID badge that can accurately pick out even very low concentrations of vapors from a chemically crowded atmosphere.

Such sensors could be embedded in clothing and designed to change color if they detect a chemical or biological threat, or they could be spread out over a large region like confetti to help the military identify areas where certain substances non grata might be hiding or lingering. In the civilian world, they might be used to detect disease on a patient’s breath, monitor pollution coming from industrial plants, and maintaining food safety.