Films could be indexed by the emotional responses they elicit 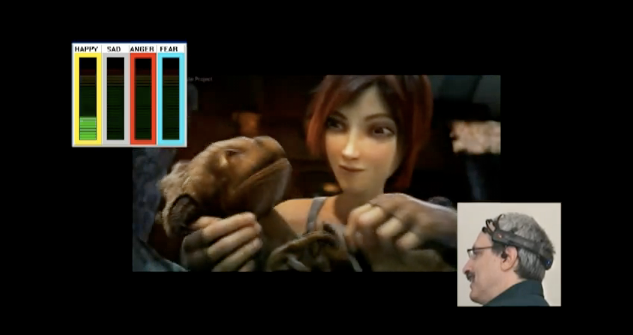 A software program tracks your emotions as you watch a movie, creating an emotion catalog. Android Review
SHARE

Plenty of human-gadget interfaces can let you control a robot or a computer with your mind. But these communications are command-based — your PR2 still can’t tell whether you’re asking it for a beer to celebrate, or to drink away your sorrows. An EEG-based affective computing system allows you to communicate your emotions, adding a new layer to human-computer interactions.

In the video below, Robert Oschler of Android Review demonstrates EmoRate, a software program that catalogs his emotions. It captures his reactions to the “Sintel” trailer, from the Durian open-source movie project.

EmoRate uses the Emotiv 14-electrode mind-reading headset, which wirelessly connects to a computer. The EEG reads and tracks your facial expressions, which allows it to track your emotions. This allows the computer to respond to your emotions and lets you affect the computer’s actions.

The computer tracks four primary emotions —  happiness, sadness, anger and fear — and catalogs when they occur. The catalog acts as a “silicon extension” of memory.

Once the catalog is built, you can search by emotion. Like a Mr. Skin for fear, the program will tell you precisely when a fear-inducing scene appears on screen.

The best part: You can search for scenes by emotion, just by remembering the scene and the emotion it conjured.

As Oschler explains, he recalls a fearsome scene in the trailer when a baby dragon is snatched away from the heroine. As he thinks about the moment, the fear meter rises, and the computer searches the catalog for fear-inducing scenes.