Based at a new multi-million-dollar energy research station, a Chinese deep-sea sub will search for new energy sources and rare-earth... 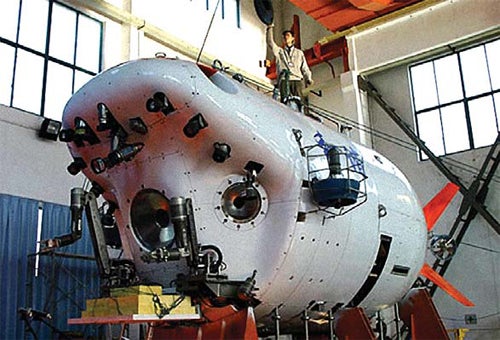 Based at a new multi-million-dollar energy research station, a Chinese deep-sea sub will search for new energy sources and rare-earth metals on the ocean floor, according to Chinese state-run media.

Chinese officials announced Thursday that the new Jiaolong sub made 17 dives in the South China Sea this summer, the deepest to 12,332 feet (3,759 meters). The feat makes China the fifth country to dive past the 3,500 meter mark.

The 27-foot-long, 22-ton sub’s main mission will be energy research, according to the state-run China Daily newspaper. It was designed to reach a depth of 23,000 feet (7,000 meters) and operate in most of the world’s oceans, the newspaper says. No other submarine in the world is rated for that deep a dive.This spring, carrying a three-person crew, Jiaolong landed on the seafloor and planted a Chinese flag, along with a sign depicting the legendary dragon’s palace. Jiaolong is the name of a mythical sea dragon.

Meanwhile, AFP is reporting that China plans to build a research base in the coastal city of Qingdao, in Shandong province, to serve as a support station for Jiaolong.

Engineers are starting design work on the 65-acre site, which would cost about $73 million, AFP says.

China’s energy exploration program began in 2002 with the design of Jiaolong, whose construction took six years. More than 100 Chinese companies were involved in the project, China Daily says.