Satellites may be docking together in orbit -- are they building Voltron? 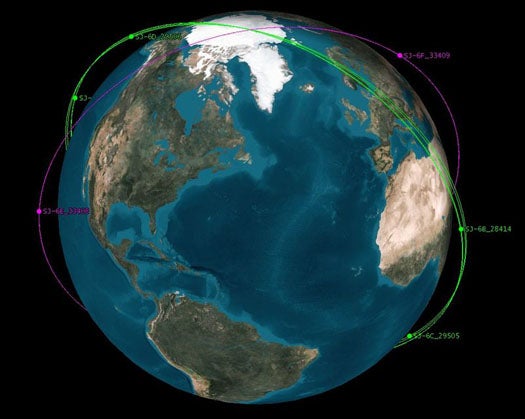 Though the world found out about it through a Russian media outlet, China has been conducting complicated space maneuvers with two of its science satellites over the past few months, directing two of its “Shi Jian” (practice) satellites to rendezvous some 370 miles above the Earth, and possibly even touch. But the fact that China has been so hush-hush about the close encounter has some wondering what it plans to use such technology for. It could be used to build a peaceful space station, but also for interfering with other nations’ satellites.

Russian space observer Igor Lissov first noticed the rendezvous buried in publicly available U.S. military data on global satellite positions. In turn it was picked up by Russian media — and only then by Xinhua, China’s state media outlet — which brought it to the attention of the international community. The data show that between June 12 and August 16 of this year, Chinese satellite SJ-12, a science satellite launched in June, made a series of maneuvers to position itself closer to SJ-06F, an older science satellite launched in October of 2008.

The satellites ended up so close together that there’s speculation that they may have even touched. SJ-06F experienced an anomaly in its orbit, shifting slightly on August 19 according to the U.S. military data. Natural external forces, like the Earth’s atmospheric drag, could have caused the slight shift in the satellite’s orbit, though that seems unlikely. It also could’ve been nudged by SJ-12, which at that point was orbiting very, very close to SJ-06F.

Orbital rendezvous, of course, is extremely complicated and demonstrates a broader technological know-how on the part of the Chinese. Outside of operations like docking with the space station, the U.S. has only undertaken the task a handful of times with two orbiting satellites. With China’s first space station module, Tiangong-1 slated for launch next year, the test was likely a test of the nation’s ability to dock two spacecraft in orbit.

But the fact that China didn’t undertake the procedure transparently has some worried that the test might have been military in nature. Whether or not that’s the case, China ain’t saying. China and the U.S. have both been known to flex their military-space muscles before — creating a good deal of dangerous space junk in the process — so let’s hope this kind of behavior doesn’t set off a new round of power-posturing akin to the memorable, somewhat irresponsible “watch-me-blow-up-this-satellite” showdown of ’07-’08.