NASA scientists have figured out what temporarily knocked out the X-ray detector on the agency’s Swift space observatory earlier this... 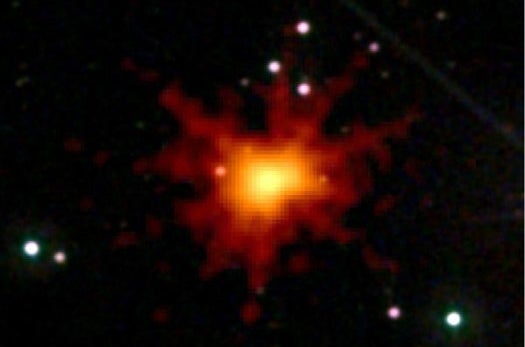 NASA scientists have figured out what temporarily knocked out the X-ray detector on the agency’s Swift space observatory earlier this summer: the strongest blast of X-rays ever recorded from beyond the Milky Way slammed into Swift unexpectedly, overwhelming the detector and puzzling mission handlers for a moment. But good luck sending a bill to the culprit for time lost; the X-rays were spawned 5 billion years ago during the violent explosion of a massive star as it turned into a black hole.

The gamma ray burst that struck on June 21 was the brightest light source ever recorded in X-ray wavelengths at that kind of distance, though in optical and ultraviolet wavelengths it was more or less ordinary. It was bright enough that the software that NASA uses to analyze the data from Swift simply shut down, as it was unable to keep up with the overwhelming number of photons bombarding the sensor. One researcher who helped write the software likened the burst to trying to measure the flow rate of a tsunami with a rain gauge and a bucket.

The software did resume capturing data shortly thereafter, recording the evolution of the burst and recovering the data that Swift detected during the software shutdown. From that, they were able to piece together a numerical picture of the intergalactic attack: 143,000 X-ray photons per second during peak brightness. By comparison, the brightest ongoing X-ray source in the sky is 500,000 times closer to us yet only sends 10,000 photons per second our way.

Dubbed GRB 100621A for those keeping score at home, the gamma ray burst was 5 times larger than the brightest one previously seen, and until it happened many thought such a bright burst wasn’t likely or even possible.