The space discoveries are piling up this week. Next up: Astronomers working with NASA’s Spitzer Space Telescope have discovered buckyballs... 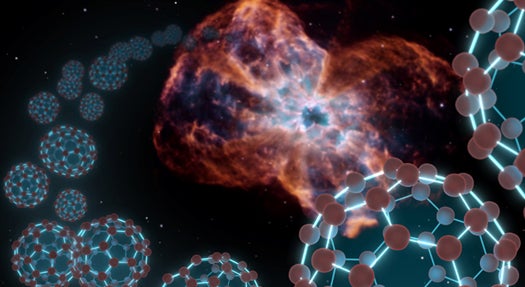 The space discoveries are piling up this week. Next up: Astronomers working with NASA’s Spitzer Space Telescope have discovered buckyballs in space for the very first time, putting an end to a decades-long search for the largest molecules now known to exist in space.

Buckyballs are so named because they resemble the geodesic domes associated with architect Buckminster Fuller (the little magnetic balls that some people keep around as a desk ornament are also a tribute to this structure). The 60-carbon-atom molecules were first created in the lab a quarter century ago and have been long since thought to exist in space, but for years they eluded researchers.

The carbon atoms in buckyballs are arranged in a three-dimensional spherical structure that gives them a soccer ball-like appearance, with the atomic bonds creating an alternating pattern of hexagons and pentagons. The structure is more than just elegant; it’s unique strength and properties have made it a sought after molecule for a range of applications including armor and superconductors.

Perhaps as impressive as the buckyballs themselves is the fact that Spitzer found them at all. They were detected in a planetary nebula called Tc 1, where an aging star had likely shed a layer of carbon rich material into a cloud. Light passing through the cloud gave off the unique spectral signatures of the buckyballs, which only made their presence known because they were at the right temperature to be seen. It’s impressive enough that Spitzer can peer out into the universe and analyze its contents down to the molecule. Looking at the right place at the right time, that’s just cosmic good fortune.