Solar-Powered Plane About to Enter Darkness Over Europe, In First Attempt at All-Night Flight

The Swiss-built Solar Impulse airplane is about to enter the darkness today, already several hours into what is slated to... 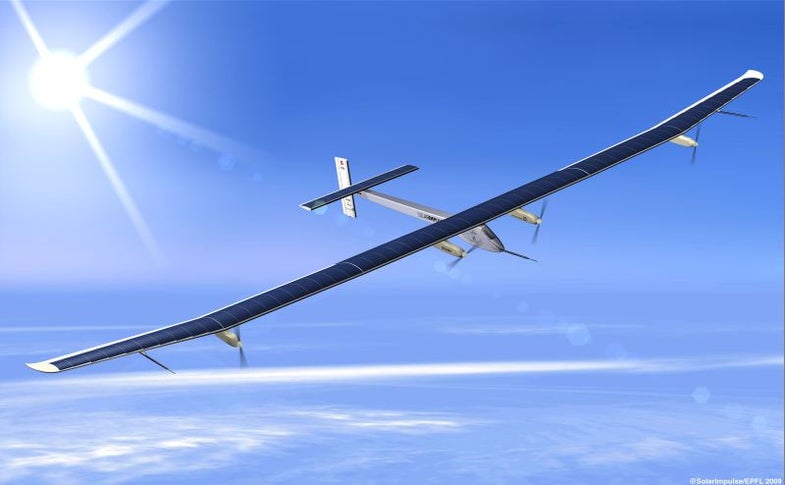 How will the aircraft manage to survive the sunless nighttime? During the day, the aircraft will soak up sun rays and gradually climb to a height of 9 km, and then at night, it will coast on what's left of the solar energy, slowly descending to a height of 1.5 km. Solar Impulse/Claudio Leonardi
SHARE

The Swiss-built Solar Impulse airplane is about to enter the darkness today, already several hours into what is slated to become its first all-night flight.

Pilot (and CEO) André Borschberg has been gradually climbing to an altitude of about 27,000 feet, with the plane’s 10,748 solar panels soaking up the sun’s rays and charging the aircraft’s batteries. As darkness falls over Europe, Borschberg will slowly descend to about 5,000 feet, essentially using the plane as a glider before reverting to battery power.

The challenge will be whether Borschberg can use the batteries efficiently enough to fly throughout the night.

It took nearly seven years to build the carbon-fiber aircraft, which weighs 3,527 pounds has a 200-foot wingspan. It is the largest and lightest airplane ever built. French aeronaut Bertrand Piccard hopes to showcase the potential of green technology — the plane does not use a drop of oil. Piccard founded the project after he flew around the world in a balloon in 1999.

Eventually, the team wants to fly across the Atlantic, Lindbergh-style, and ultimately circumnavigate the globe using only solar power. The first flights took place last year, and today’s all-nighter is the next milestone on the path toward that goal.

The groundbreaking flight is being broadcast live on the web.