MIT Study: USA Broadband May Not Be So Awful After All

Good news for BitTorrent users — a new MIT study says the nation’s broadband network is in better shape than... 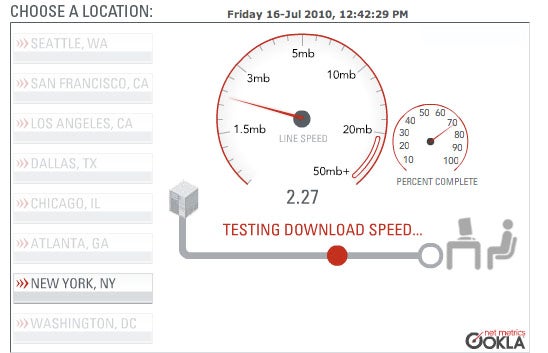 Good news for BitTorrent users — a new MIT study says the nation’s broadband network is in better shape than Uncle Sam thinks it is.

The Federal Communications Commission released a National Broadband Plan back in March, which included the frustrating and surprising statement that most Americans’ broadband speed is half what service providers advertise.

But it might not be that bad after all, MIT researchers say — most Internet measuring methods underestimate the speed of the access network. That’s the part of the Internet ISPs actually control.

In one example, Bauer ran a speed test on his home computer in Cambridge, Mass., using a test server in New York. Most of the time, he was getting rates close to those advertised by his ISP. One afternoon, the rate fell precipitously, and Bauer realized his ISP had re-routed his connection to a different server because the New York server was overloaded. The nearest free server was in Amsterdam — explaining why the speed dropped so much.

It’s hard to tease apart end-to-end performance tests and attribute bottlenecks to a specific cause, the study says (PDF). Most testing methodologies don’t do this very well, and the result is a potentially misleading diagnosis of a broadband network’s quality.

In the study — conducted by MIT labs which receive funding from telecom companies — the authors analyzed a half-dozen systems for measuring the speed of Internet connections. They underestimated the access’ networks speed for a variety of reasons, an MIT news release explains.

For instance, the FCC study analyzed data for broadband subscribers with different tiers of service. The analysis didn’t know which data corresponded to which tier, so they assumed the tier could be inferred from the maximum measured rate, MIT says. But in reality, the lower-tier subscribers sometimes ended up with better data rates than they paid for. The study the FCC relied upon misclassified this, the researchers say — good service on a cheap tier was classified as lousy service at a higher tier.

So maybe your ISP is treating you better than you think.