It’s a Trap! Atom Corral Is a Major Step Toward Quantum Computing

This maze of electrodes, known as a surface-electrode ion trap, brings us closer to building quantum computers—that is, computers that... 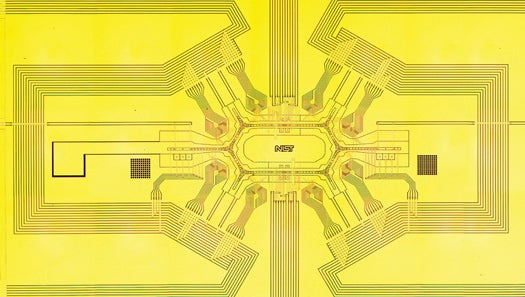 This is a photograph of NIST racetrack ion trap under development as possible hardware for a future quantum computer. The 150 zones for storing, transporting and probing ions (electrically charged atoms) are located in the center ring structure and the six channels radiating out from its edges. Courtesy J. Amini/NIST.
SHARE

This maze of electrodes, known as a surface-electrode ion trap, brings us closer to building quantum computers—that is, computers that could manipulate the quantum-mechanical states of atoms to process data millions of times as fast as today’s most powerful supercomputers do.

Whereas computers now use transistors to crunch 0s and 1s, a quantum computer could theoretically perform dozens of calculations simultaneously by zapping charged subatomic particles, called ions, with a laser.

One of the first steps in building a functional quantum computer is trapping the ions in order to zap them. That’s why physicists at the National Institute of Standards and Technology have created this ion trap, a web of electrodes that produces an electric field to hold the ions in place. Once in place, the ions hover just above the trap’s surface. Project physicist Jason Amini says there’s still much work to do. For example, he and his group would like to build a trap that can hold hundreds of ions instead of the two or three it currently manages. If they can pull it off, the traps could outperform conventional computers on certain tasks within the next five years.