Space is like the Mojave Desert; once you get out there past a certain point, there’s really nowhere convenient to... 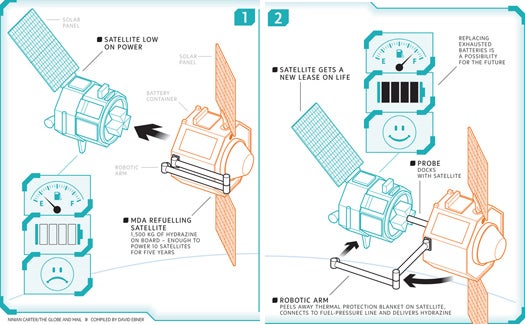 Space is like the Mojave Desert; once you get out there past a certain point, there’s really nowhere convenient to pull over, stretch your legs, buy a Red Bull, and top up the gas tank. But Canadian company MacDonald Dettwiler and Associates (MDA) have hatched an ambitious scheme to build a satellite fueling station in space that could service and restore aging satellites to working order, extending their lives for years.

As most readers have probably gleaned from the abundance of stories on space junk and the Air Force’s scramble to find a replacement for GPS, we’ve become increasingly reliant on satellites over recent decades, some would say too reliant. But for being such an integral — and expensive — part of our daily lives, we have virtually no means to service a busted satellite while in orbit (see: Zombiesat) or to replenish the propellant supply that satellites use to keep on the proper course.

MDA wants to fill that niche by launching a satellite refueling station that can track down and dock with satellites in the sky, filling them up with hydrazine and performing small repairs. Such a service could double, or even triple, the lives of satellites already flying, provided their on-board instruments are still working properly.

But such a refueling station isn’t the same as pulling up to the gas pump, or even refueling a jet in flight. Satellites are roaring through space at nearly 7,000 miles per hour, so a fueling station would have to first catch the satellite in motion, then somehow finagle the fueling port open with a robotic arm of some kind — if, that is, the door hasn’t been seared closed by years of exposure to space. It’s been done exactly twice before, but both times it happened under experimental conditions where the satellite and the refueling vehicle were both new and designed to be compatible.

Still, it’s not impossible and MDA thinks it could make $100 million a year servicing satellites which themselves are very expensive to replace. In the past decade $16 million was spent replacing satellites that failed or simply ran out of fuel and were abandoned. Between 2012 and 2020, $36 billion more will have to be spent to replace the 136 satellites slated for decommissioning, and all for want of an orbiting Stop’n’Go. MDA hopes to be testing technology in space by 2013.