Planck Telescope Stitches Together Picture of the Entire Universe

While other satellite observatories zoom in on exoplanets or snap photos of star birth on faraway galaxies, the European Space... 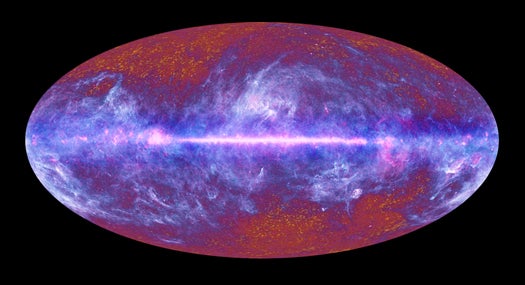 While other satellite observatories zoom in on exoplanets or snap photos of star birth on faraway galaxies, the European Space Agency’s Planck Telescope is studying the bigger picture. After a year in service, the observatory has surveyed the cosmos and provided researchers with its first all-sky image, a snapshot of the entire universe as viewed from Planck’s position in the sky.

The image is exactly what the Planck mission was designed to produce, but the milestone picture of the universe is just the beginning from a scientific standpoint. Said the ESA’s Director of Science and Robotic Exploration David Southwood in a press release: “We’re not giving the answer. We are opening the door to an Eldorado where scientists can seek the nuggets that will lead to deeper understanding of how our Universe came to be and how it works now. The image itself and its remarkable quality is a tribute to the engineers who built and have operated Planck. Now the scientific harvest must begin.”

Continuing with the harvest metaphor, the all-sky image should provide a scientific bounty. The bright disk running through the middle of the pic is our own Milky Way Galaxy. The wispy blue trails of gas and dust protruding from the center disk are regions where stars are violently forming as the makings of the universe come together. But most interesting to astronomers are the fringes at the top and bottom of the image, where the yellow and magenta regions represent the oldest light in the universe, leftover from the Big Bang that exploded the cosmos into existence some 13.7 billion years ago.

That light is the CMBR (cosmic microwave background radiation) invisible to the naked eye but quite discernable to Planck’s battery of sensors that measure light at the longest wavelengths. The CMBR actually covers the entire sky but is overshadowed in the center of the image by the emission of the Milky Way. By the time ESA researchers are through processing the data, they’ll have removed the Milky Way, revealing the best look of the CMBR ever obtained. From that, astronomers should be able to glean lots of data regarding the early life of the universe and the means by which the current state of things came to be.

That first all-CMBR scan isn’t slated for release until sometime in 2012, when Planck has completed four all-sky scans. In the meantime, it will log individual objects within our galaxy as well as other galaxies in the sky, producing an updated cosmic catalog early next year. 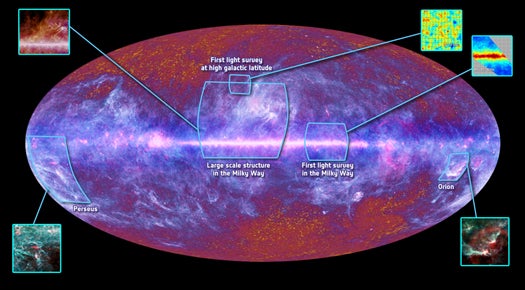