A team of unmanned subs developed by European researchers could use new software to work together as a team, exploring... 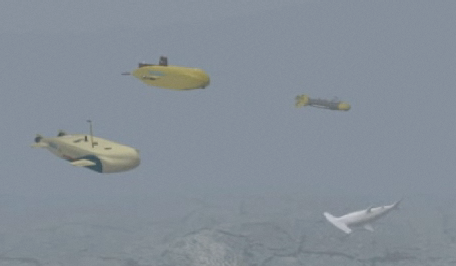 A team of unmanned subs developed by European researchers could use new software to work together as a team, exploring the ocean’s deepest secrets, conducting search-and-rescue operations or, conceivably, sealing off a blown-out oil well.

The European Union-funded Grex project, named for the Latin word for “flock,” involves networking software to coordinate multiple autonomous underwater vehicles, or AUVs. Multiple AUVs can benefit from the sum of their parts, as the project’s Web site notes — each could perform separate functions that contribute to a larger mission.

Until now, AUVs have operated solo, partly because it’s difficult to link different vehicles through seawater at distances of more than a few hundred feet. But in the Grex system, vehicles will be able to act as relay stations, bouncing a control signal from the mother ship to the networked submarines over many miles.

One of the firms involved in the Grex project, German firm MC Marketing Consulting, designed a “Grex box” that incorporates communications tied to the vehicle controls. The system could be added to an existing AUV, retrofitting it for use as a team member, according to Michael Jarowinsky of MC Marketing Consulting.

In tests off the coast of Portugal last winter, Grex-capable vehicles were able to assemble into formation and perform “swarm” tasks. Two small boats and two AUVs each ran its own tack while talking to the others and adjusting its speed to reach formation.

The main goal is to use Grex vehicles for marine science — as the group points out, humans know more about the surface of the moon than we do about the oceans, 90 percent of which has not been explored. But the technology has several commercial applications, including the offshore oil industry, Jarowinsky says.

SeeByte, one of the project’s partners, plans to market the control software and graphical user interface for managing schools of AUVs. The project coordinator, ATLAS Elektronik, plans within the next four years to offer a complete system, including the Grex box, software and installation and training.