In orbit, debris as small as a metal screw can cripple a vehicle or kill an astronaut. Here are five ideas for cleaning up the growing band of trash circling Earth 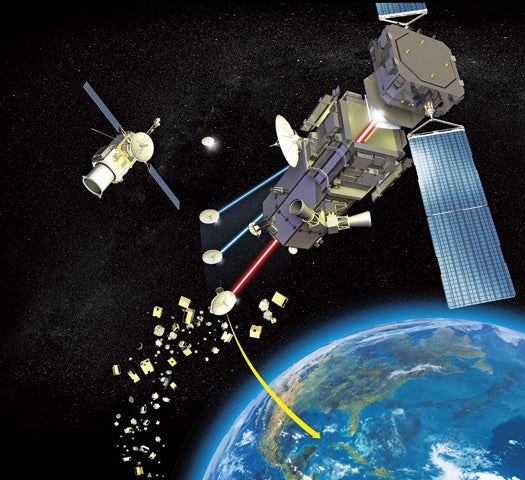 One Friday last November, the six astronauts onboard the International Space Station received an urgent warning from mission control: Watch out for space junk. A piece of orbital debris, possibly a chunk of satellite, was hurtling toward the station. A direct hit could break through the hull. The crew prepped for escape.

The fragment ended up missing them by about 3.7 miles. Near-collisions between debris and spacecraft are on the rise, as we continue to put trash in orbit faster than it can fall back out—a phenomenon known as the Kessler Syndrome, in which each collision between pieces of space debris creates even more debris. It’s a chain reaction that will make the problem much worse.

In October, just one week before the ISS scare, NASA delayed a return trip from the ISS of a Japanese craft when a shard of Russian satellite was spotted near the space station. In February 2009, two satellites smashed into each other 500 miles over Siberia. And in 2007, China littered low-Earth orbit with the fragments of a satellite that it had deliberately shot down. The debris population in low-Earth orbit now totals more than 20,000 items larger than four inches, from pieces of rockets to old screwdrivers.

In 1976, when NASA scientists first identified the debris risk, they predicted that space collisions would happen once a century. Four occurred over the next four decades. Today the agency predicts four collisions every 20 years. Former NASA scientist Don Kessler, who discovered the debris amplification process with former Norad senior analyst John Gabbard, foresees a catastrophic collision once every 20 years.

Even NASA recognizes that its existing rule—objects must have the capability to push themselves (or be pushed) out of orbit within 30 years of launch—isn’t enough anymore. Earlier this year, it published a paper showing that it could make low-Earth orbit safe by removing five objects per year.

To collect ideas on how to achieve this, last year NASA and Darpa, the Department of Defense’s research arm, gathered hundreds of engineers and scientists for the first-ever International Conference on Orbital Debris Removal, in Chantilly, Virginia. Nearly all the solutions discussed there rely on finding some way to deorbit the debris so it burns up in the atmosphere. The conference also revealed that international cooperation is the greatest hurdle. There is, for example, no official consensus on what constitutes space debris—one country’s seemingly dead satellite might just be hibernating for future use. Governments are concerned that debris-removal systems could have military uses. And not every country is providing details about what they have in orbit.

To punctuate the need for international cooperation, Brian Weeden of the Secure World Foundation noted at the Orbital Debris Conference, “60 percent of the orbital-debris population is owned by Russia and China.” He scanned the room. “Is anyone from China or Russia at this conference?” One brave person in the back raised his hand.
Whatever the challenges here on Earth, something must be done up there. With some luck, one of the following five solutions could clean up our orbital junkyard.

How It Works: In a ground-based configuration, a detection system could be made up of radar or lidar to locate a piece of stray debris. Then a laser fires a series of pulses at the object, altering its orbit and knocking it into the atmosphere, where it descends and is incinerated. Space-based systems require a shorter range and lower laser power.

Pros: A laser system is effective on objects smaller than four inches in size, because they are less apt to create more debris during the removal process. A laser-equipped satellite would wait in orbit for a target to pass by and then zap it. “The duck-hunter paradigm is becoming an option,” says Richard Fork, a principal investigator for the Laser Science and Engineering Laboratory at the University of Alabama at Huntsville. “You sit and wait for debris to come past you. Then you can hit it with enough impulse to deorbit it.”

Cons: Because the ground-based lasers would need to be powerful, the systems are alarming to countries that see in them the potential for anti-satellite military technology. 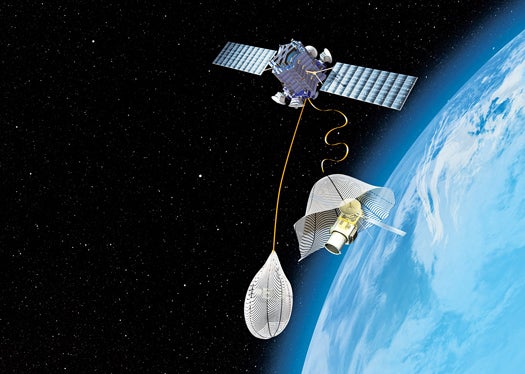 A tether could work like a giant electrified lasso, pulling objects out of orbit.

How It Works: Aerospace company Tethers Unlimited proposes a system called Rustler (for Round Up Space Trash Low Earth-orbit Remediation). Once launched into low-Earth orbit, the satellite releases an electrodynamic tether, a 1.5-mile-long cable that conducts electricity. The conductivity allows the tether to wrap a net around any piece of debris that it encounters, which it then drags into the atmosphere, where the object either falls into the ocean or burns up on reentry. The net secures even small objects tumbling around in space, a challenge for other systems.

Pros: Tethers and nets don’t require propellant, saving cost by relying on solar power and electrodynamic thrust, and can piggyback on almost any low-Earth-orbit launch.

Cons: It requires tricky maneuvering, because potentially miles of material twisting around in space could just create more junk.

Plausibility: Tether-based solutions have been tested by NASA, including a 1996 experiment with a 12.5-mile cable in space. The Rustler system was tested on a zero-G flight last September and could launch on a real mission within five years. 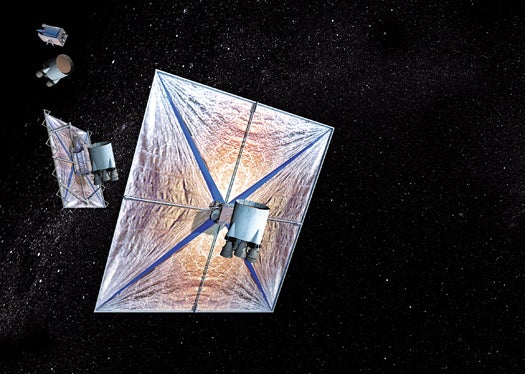 How It Works: The sun’s radiation exerts force on the ultrathin fabric of solar sails, much like wind propels a sailboat. These sails can clean up orbit by slowing debris enough that it deorbits. For example, an expandable 97-square-foot sail can be launched as a secondary payload on even a small 110-pound satellite, and an onboard system or ground control triggers its deployment. Conductive coils embedded in the sail control its angle, so it can maneuver a satellite out of orbit; sail and satellite disintegrate together in the atmosphere.

Pros: The material is cheap and portable.

Cons: The sail’s expansion and the spacecraft’s altitude need to be carefully calculated beforehand.

Plausibility: The technology has existed for decades, from a sail-equipped craft in the mid-1970s intended to ride along with Halley’s Comet (the craft never flew, and the project was scrapped) to large solar arrays currently affixed to the Messenger spacecraft, which are helping steer it to Mercury. Most recently, the Japan Aerospace Exploration Agency launched a solar-sail-propelled “space yacht” called Ikaros in May. But the solar sails precisely controllable enough to remove debris are still years away. 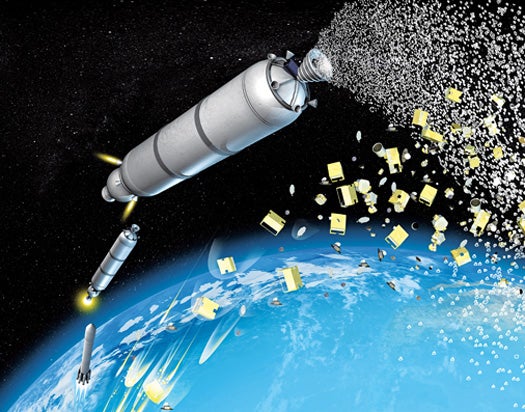 Tanks of liquid gas would emit mist that slows down objects passing through enough that the debris would fall from orbit.

How It Works: One of the more novel solutions, first proposed by researchers at NASA’s Ames Research Center in 1990 and recently resurrected, is to use frozen mist to drag an object out of orbit. A rocket launches a tank filled with liquid gas, such as carbon dioxide, and thrusters position the tank near the path of the target object.Thousands of miles from the debris, the tank sprays a cloud of frozen mist. The droplets slow down and deorbit anything they encounter. According to the idea’s originator, aerospace engineer George Sarver of Ames, a spaceship emitting a 220-pound, 62-foot-diameter cloud of frozen mist could deorbit dense objects such as steel nuts. Larger clouds could stop less-dense items like insulation.

Pros: Once the mist dissipates, nothing remains in orbit. The tank falls back into the atmosphere, which means less clutter that could otherwise create more debris.

Cons: It requires precise aim, because each tank sprays its shot just once.

Plausibility: “We could probably test it in orbit within 18 months if NASA funded it,” says Creon Levit, the chief scientist for programs at Ames. 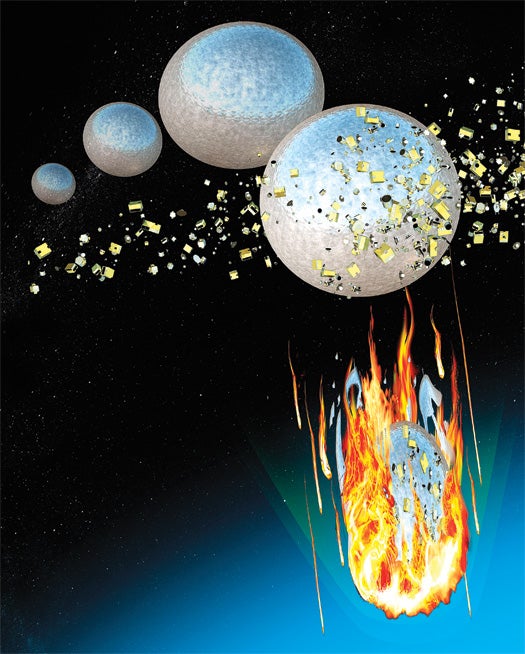 Large balls with adhesive shells could stick themselves to debris and carry it out of orbit.

How It Works: One idea to capture tumbling debris employs orbiting spacecraft that would use robotic arms to grab and release debris, essentially tossing it out of orbit so it burns up in the atmosphere. Sean Shepherd, a curriculum coordinator at Eastern New Mexico University, proposes a more novel idea, called Adhesive Synthetic Trash Recovery Orbital Spheres, or Astros—essentially a collection of sticky balls. The balls consist of a layer of metallic foam (such as silicon carbide) and an outer shell of adhesive (such as aerogels or resins). They attach themselves to debris and then dive into the atmosphere, where both are incinerated.

Pros: Spacecraft that carry and position the robotics are easier to control than tethers or sails and can remove multiple pieces of debris. Adhesives are cheap.

Cons: The adhesive balls can’t be compressed, so packing them into a rocket for launch will be difficult.

Plausibility: Hanspeter Schaub, the associate chair of graduate studies in the Aerospace Engineering Sciences department at the University of Colorado, says the orbiting robot concept could be tested in space within five years.