Video: Robot Arm Wants Nothing More Than To Master the Art of the Flapjack-Flip

And after 50 or so tries (and some kinesthetic training), he does 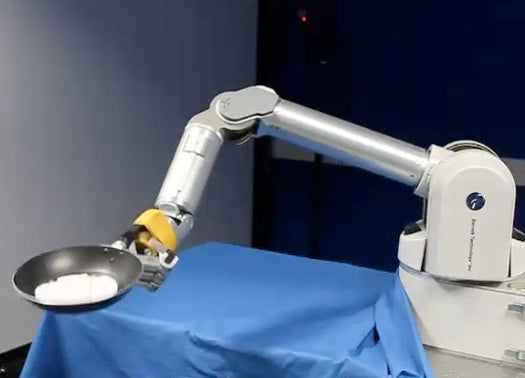 This pancake-flipping robotic arm is definitely one of the more endearing helper ‘bots we’ve seen. After a hand-held lesson from its programmers, it just tries so hard to flip a pancake. And it fails, again and again.

After about 50 attempts, the arm is finally able to perfect its wrist-flipping technique, so the fake metal flapjack flips and lands in the skillet. You almost want to start clapping.

The robot learned its skillet skills through kinesthetic teaching, where the user grasps and moves the robot to provide an example of how to flip a pancake. Roboticists Petar Kormushev and Sylvain Calinon from the Italian Institute of Technology helped the robot build on what they taught.

It is called reinforcement learning, and it works by allowing the robot to reproduce the task in different configurations, so it figures out for itself what it needs to do.

For instance, the robot’s arm needs to be stiff to throw the pancake in the air and make it flip. Catching it requires the robot hand to be pliant and have “give,” so it can catch the pancake without it bouncing off.