It’s not exactly rocket science, but the same company that builds the rocket boosters that launch the Space Shuttles into... 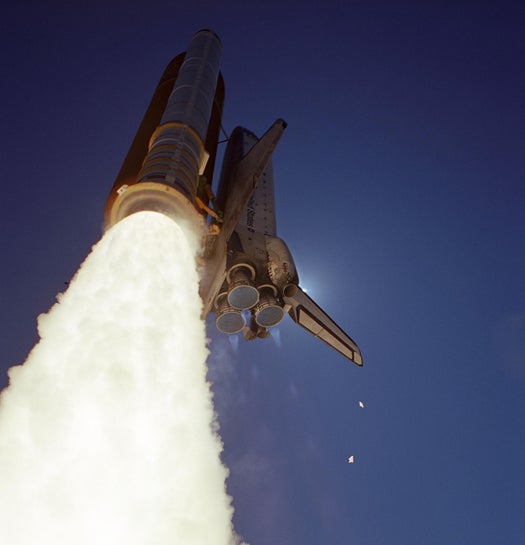 It’s not exactly rocket science, but the same company that builds the rocket boosters that launch the Space Shuttles into orbit has a novel idea for bringing down the cost of carbon capture. Aerospace and defense company ATK wants to pressurize the exhaust emissions from such high-carbon polluters as coal-powered electrical generators and run it through rocket nozzles that will freeze the CO2 into dry ice, causing it to fall out of exhaust gasses.

Such a process could replace the chemical processes used to scrub CO2 from gas emissions. Those chemicals make up a large part of the expense of scrubbing carbon dioxide form emissions — a full 80 percent of the cost per kilowatt hour of electricity produced at a coal plant, ATK’s vice president tells Discovery News. A rocket nozzle approach could reduce that to more like 30 percent.

The science is pretty simple: when you pressurize something like coal plant emissions and then run them through a high-speed aerodynamic accelerator nozzle, the gasses will compress and then expand rapidly on the other side of the nozzle. That rapid expansion can cause some molecules to freeze. In the case of water vapor, the gas would turn to regular water ice. In the case of CO2-laden coal emissions, the carbon dioxide should freeze into dry ice — at least in theory — allowing it to be culled from the other gases for sequestration or other uses.

Considering that coal plants make up for more than a third of U.S. carbon dioxide emissions, the ability to effectively pull CO2 out of coal emissions could restore coal’s place as a viable alternative to foreign oil and as a cleaner bridge to a renewable energy future. Of course, the technology has to work first. ATK wants to get it working smoothly in the lab within 14 months and have a pilot program for the technology installed on a working power plant shortly thereafter.