Two rotors are better than one, and if our recent excitement over UPenn’s quadcopter is any indication, four rotors is... 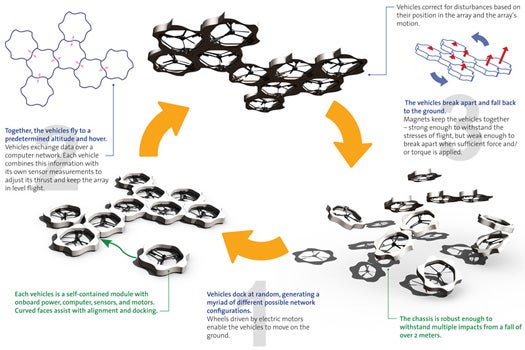 Two rotors are better than one, and if our recent excitement over UPenn’s quadcopter is any indication, four rotors is better than two. Sometimes. Researchers at the ETH Zurich recognize that different tasks call for different aircraft, and with that in mind they’ve designed the Distributed Flight Array, a flying platform consisting of multiple small autonomous single rotor aircraft that can dock with one another to create a larger, more powerful aircraft.

The DFA, developed by ETH Zurich’s Institute for Dynamics Systems and Control, consists of multiple fixed propellor aircraft, each with its own sensors and flight control system. Individually, the components fly somewhat erratically, but joined together they become a larger sensor-based flight platform, capable of maintaining level flight by rapidly sharing data between them. When docked together, if something disturbs the array’s level flight each individual rotor can compensate appropriately to bring the system back into balance.

While the current DFA is a proof of concept, such a scheme could have a variety of applications, not least of which is the relatively straightforward yet sometimes difficult task of picking stuff up. Since the DFA is modular, users could deploy enough lift to execute a task without wasting resources on overkill. Further, its modular nature allows for some degree of failure within the system. If one or two of the bots fail, the others could compensate and even reconfigure to allow fresh bots to swap into the places of those that aren’t working.

Swapping components mid-flight might seem like tricky business, but considering how far researchers are coming along with these kinds of autonomous vehicles it’s certainly feasible. Just check out the video below, also from ETH’s Institute for Dynamics Systems and Control. These two quadcopters don’t just hover with precision. Their movements are so well choreographed, they actually dance with each other. No, seriously.