Contolled, directional electromagnetic pulse weapons are usually the stuff of sci-fi (see: the Matrix trilogy), as creating an EMP strong... 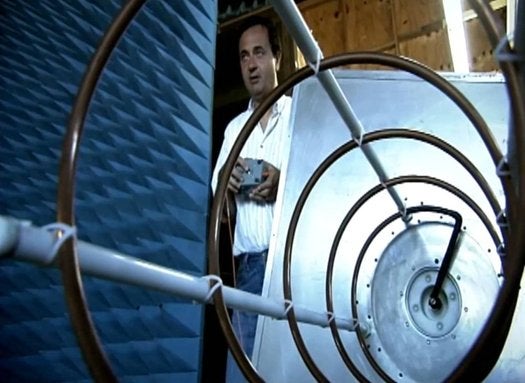 Contolled, directional electromagnetic pulse weapons are usually the stuff of sci-fi (see: the Matrix trilogy), as creating an EMP strong enough to, say, disable a vehicle or larger infrastructure requires a significant conventional explosion. But work being pursued by the French Ministry of Defense says otherwise, claiming that an early prototype of an “electromagnetic bazooka” could produce weapons-worthy EMP from electricity alone, minus the chemical explosion.

The work taps an audio signal processing technique (also invented by a French physicist in 2004) called time reversal signal processing. Using what’s known as a time reversal mirror, researchers found they could take a short pulse of electromagnetic energy fired from one antenna and bounce the exact signal back with its wave-form perfectly reversed (hence “reversal mirror”). This relies on yet another device, a arbitrary waveform generator, which can generate pretty much any waveform in a matter of milliseconds.

This process allows the researchers to exploit another principle, known as the “pulse compression property” of time reversal, which generates a significantly amplified version of the signal at some point outside of the reverb chamber housing all the other gizmos. Set up in the proper array, the engineers were able to create an arrangement that could amplify the original signal by 10,000 times. Needless to say, that’s enough to crank up a relatively weak EMP signal to devastating levels that could be used to disable electronic devices from a distance.

That could be a problem, of course, for militaries around the globe that rely on growing arsenals of electronic gear. There’s also a security question; an EMP weapon placed with ill intent could disable an aircraft on approach or takeoff, or be used to throw economies or defensive systems into chaos by crippling key computer networks. Further, it doesn’t appear that such a weapon would necessarily require highly technical know-how or hard-to-acquire hardware or materials. But on the bright side, such an EMP bazooka could prove quite effective in the upcoming war with the machines.