Another rocket launch on the Korean peninsula ended in failure today as South Korea’s second attempt to put a satellite... 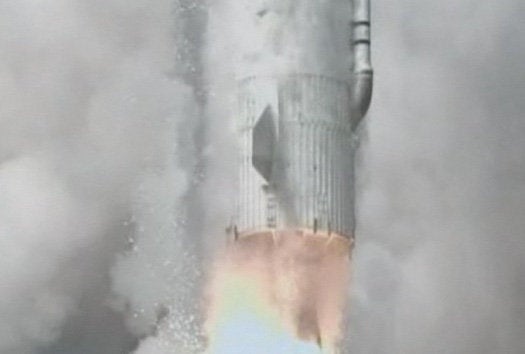 Another rocket launch on the Korean peninsula ended in failure today as South Korea’s second attempt to put a satellite into orbit exploded 137 seconds after takeoff. Footage of the launch shows the rocket successfully clearing the launch pad and heading for the upper atmosphere, but a bright flash captured by a camera-mounted rocket was among the last transmissions the rocket sent back to Earth before launch handlers lost contact with the rocket completely.

Cameras on the ground followed a white speck in the sky as it plummeted from an altitude of 44 miles into the sea. The loss of the $400 million rocket and its satellite payload could be a major setback for South Korea’s space ambitions, as this is it’s second space failure in a row. In August of last year the nation reached orbital altitudes but failed to put the satellite it was carrying into the proper orbit. For a nation racing to get into the commercial space game, its record appears less than reliable at this point.

The 108-foot KSLV-1 rocket was assembled partly in Russia and partly in South Korea, and at first glance appears to have suffered a malfunction during first stage ignition according to South Korea’s science minister.

There’s no word yet on how this might alter South Korea’s long-range rocketry plans, but it’s unlikely that the nation will give up on its efforts, at least as long as its not-so-friendly neighbor to the north continues to test long-range ballistic missiles – sorry, we mean scientific space rockets – every so often. North Korea naturally bristles every time South Korea makes another technological stride in rocket science, so no doubt if there’s anyone smiling over today’s launch failure it’s someone in Pyongyang (of course, you’d be smiling too if you’d just invented cold fusion).

Check out RussiaToday’s video footage of the launch below, and of the rocket’s demise below that.