In recent years, the U.S. military has been making small strides toward a greener energy standard – the Navy wants... 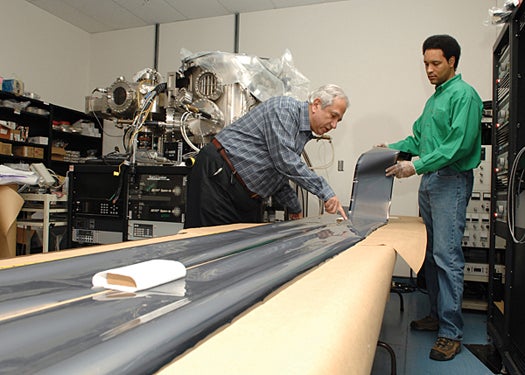 In recent years, the U.S. military has been making small strides toward a greener energy standard – the Navy wants to create a green strike group by 2012, while the Air Force has been testing biofuels in its aircraft. But for troops on the ground relying increasingly on electronic devices, solar is the way forward. With that in mind, DARPA has assembled an industry-academic team of photovoltaic leaders to create the next generation of battle-ready solar cells that achieve 20 percent conversion while standing up to harsh combat conditions.

The $3.8 million dollar, 54-month Low-Cost Lightweight Portable Photovoltaics program (PoP) includes several private PV companies and will be led on the academic side by the University of Delaware’s Institute of Energy Conversion (IEC) with the goal of demonstrating solar cells that are not only cheap to produce, but sturdy enough to withstand the stresses of the battlefield. That means flexibility, durability, and efficiency never before seen from commercial solar technology.

To do so, the research team will push thin-film, flexible copper-indium-deselenide solar cells to their limits, tapping the technology portfolios of at least four different industry partners to meet DARPA’s goals, which – per usual – are lofty even given the four-and-a-half year time frame. By comparison, commercial solar panels range from 5-20% efficiency, but flexible thin-films generally average somewhere between 7-11% efficiency, and they’re nowhere close to combat-ready.

To make the leap, the team will obviously have to focus on the dual goals of upping efficiency while turning the delicate into the durable. That’s going to take some serious innovating in materials and PV tech, but the good news – as is often the case with DARPA projects – is that advances in the technology should eventually trickle on down to civilian tech, giving all of us tough, portable solar powered devices to abuse.