Everyone’s got World Cup Fever this weekend, and for a lucky few that means getting the chance to break in... 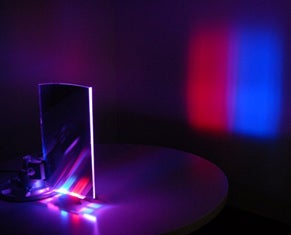 Everyone’s got World Cup Fever this weekend, and for a lucky few that means getting the chance to break in their brand-spankin’-new 3-D TVs as the matches are broadcast from South Africa. For those who haven’t taken the 3-D plunge yet — be it because of prohibitive pricing or not wanting to deal with the dorky glasses — Microsoft’s Applied Sciences group has shared a new glasses-less 3-D display that could herald the adoption of the sets at long last.

The 2.5 million 3-D HDTV sets that are expected to land in homes this year might seem like a lot, but it’s really only a drop in the TV bucket. Early adopters will always exist, but this current wave of next-gen home-theater gear has more standing in its way than price. Who wants to wear those glasses? (Especially when most 3-D TV packages only come with two pairs, with extras running at least $50 a pop.) Doesn’t exactly make for the best 3-D World Cup viewing party, now does it?

We’ve seen small-scale glasses-free 3-D displays before, like the LCD screen on Fuji’s 3-D camera that use light directed at each eye individually to deliver a stereoscopic image. Microsoft’s display does a similar trick, but on a much larger scale. Their lens has a series of LEDs along the bottom edge of the screen that switch off and on rapidly and at varying angles to control where the light goes.

The screen can deliver a 3-D image to two different viewers’ eyes at once. In order to do so, its onboard computer has to track their eyes to target the light to each individual. In the past, such systems have been very bulky to account for air space needed between the lens and projector; Microsoft’s design, though, uses a lens that tapers from 11 millimeters thick at the top to six millimeters at the bottom. This taper means that the light can travel through the lens instead of thin air, Applied Sciences Group Director Steven Bathiche told Technology Review, meaning the entire setup can substantially shrink in size.

Light from the diodes enters the lens along the bottom and bounces through the lens until it reaches the proper viewing angle, at which point it escapes.

Though the setup currently only has a viewing angle of about 20 to 40 degrees, it’s still early in the development stages. One day the lens could oust the now-conventional backlight in LCD HDTVs to bring home a glasses-less screen.