The second phase of the Mars500 simulated mission to the Red Planet launched this morning as six men — a... 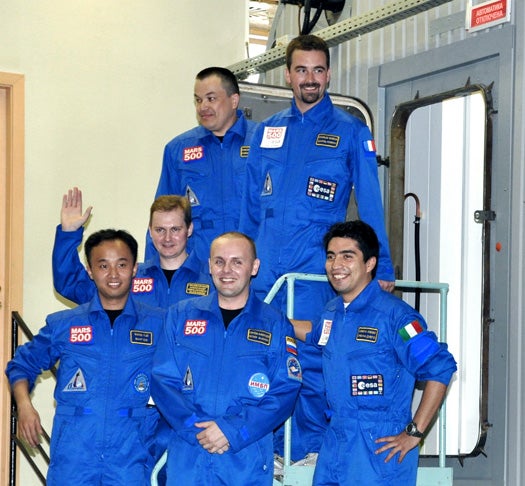 The second phase of the Mars500 simulated mission to the Red Planet launched this morning as six men — a Frenchman, an Italian, one Chinese man and three Russians — were locked inside a 19,500-cubic-foot facility outside of Moscow, where they will remain for the next 520 days.

The crew will remain completely isolated for that duration, going through the motions of a real manned mission to the Martian surface, including a 250 day journey just to get there, 30 days in orbit around mars, and 240 days for the return trip. During the 30 days in orbit around Mars, three of the crew members will “descend” to the surface in a landing module and two will actually conduct a spacewalk on a reconstructed Martian surface.

During the trip, the crew will have to survive under conditions similar to that of a real Mars mission. All of the food they have for the entire journey was locked in the facility with them, so they’ll have to ration their supplies. They’ll also have to cope with intense periods of monotony, wherein lies the real value in the experiment. Researchers will be monitoring the mental and physical effects on the individual crew members as the deal with their confined environment and lack of communication with the outside world.

That’s not to say the crew be totally cut off from their home planet. They will have access to email, though communications will be delayed by up to 40 minutes, just as they would be if the facility were humming through space millions of miles away. But aside from that, it’s six dudes in a metal tube for the next year and a half. If all goes well — meaning no one experiences life-threatening illness or has a complete mental breakdown — the hatch won’t open again until 2011. Let’s hope someone packed a deck of cards.