It’s sink or sail time for Japan’s IKAROS spacecraft, and according to initial reports from JAXA the unfurling of the... 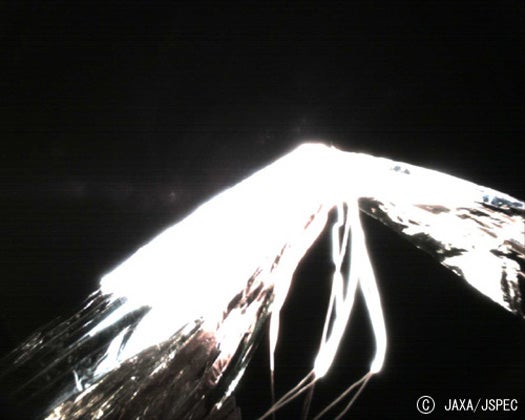 It’s sink or sail time for Japan’s IKAROS spacecraft, and according to initial reports from JAXA the unfurling of the first solar sail deployed for actual deep space travel went off without a hitch.

But the successful sail deployment isn’t a guarantee of success. IKAROS (Interplanetary Kite-craft Accelerated by Radiation Of the Sun) still has to get moving, and mission handlers say in their blog posts today that it will be a few weeks before we know if the sail is really working the way it is supposed to.

How is it supposed to work? The sail is made of aluminized plastic that’s a mere 0.0003 inches thick and covered in thin-film solar cells. When photons from the sun strike the sail, they bounce off and impart their forward momentum to the sail, which tows a small spacecraft. Photons are quite small but they are also abundant, so while it takes a while to get moving, that momentum builds up over time.

Since it’s powered by the sun, solar sail craft require no propellant or other power source, which make them a leading candidate for long-distance, interstellar space travel. And because the sail collects photovoltaic electricity as well, future spacecraft could be augmented with an engine that also runs off the suns energy.

Of course, none of this works if the ultra-thin sail doesn’t deploy properly. JAXA was able to coax their sail into unfurling by rotating the spacecraft rapidly, spinning the sail out with centrifugal force.

IKAROS is more or less a proof of concept, so the craft isn’t designed to do anything beyond proving the technology can actually carry the craft out of Earth orbit and toward the solar system beyond. But JAXA has a second solar sail mission slated for later this year in which the spacecraft will integrate ion propulsion engines with a 164-foot solar sail. That spacecraft will attempt to reach Jupiter and the Trojan asteroids by cruising on sunshine.