In the U.S., we often complete the run-up to graduation by writing 25 pages of extremely dry thesis that is... 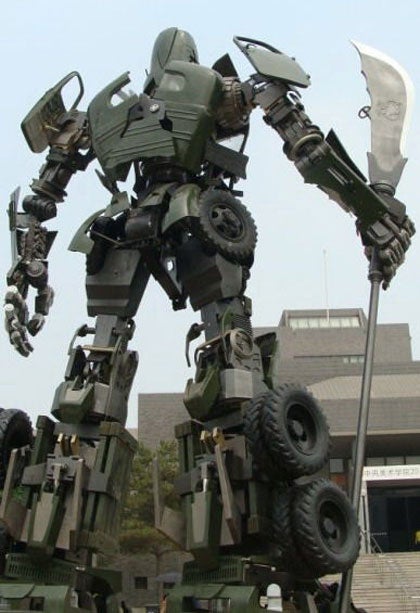 In the U.S., we often complete the run-up to graduation by writing 25 pages of extremely dry thesis that is typically read and appraised by a single person before being relegated to the library stacks forever. Bi Heng, a student at the Central Academy of Fine Arts in China, decided that instead he would create a 4-ton, $43,000 Transformer-inspired sculpture honoring legendary Chinese general Guan Yu.

The sculpture was assembled from components of an old Jiefang brand vehicle, a 25-year-old military service truck employed by the People’s Liberation Army. Robo Guan Yu stands about 32 feet tall and wields a dynastic-era weapon that makes for a nice juxtaposition with the post-Revolutionary scrap he’s assembled from.

As for the real Guan Yu, he was a respected general at the end of the Eastern Han Dynasty and a key player in the civil war that ended it. Though his military exploits and valor have been pumped up to mythical standards over the years, he was apparently legitimately revered for his prowess at kungfu. Though Robo Guan Yu is unfortunately static, check out the accompanying promo video below to see the general’s latest moves.