The U.S. military has been searching high and low for a technological answer to the relatively simple but extremely deadly... 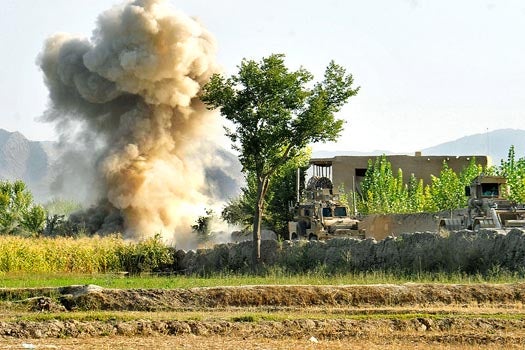 The U.S. military has been searching high and low for a technological answer to the relatively simple but extremely deadly improvised explosive device – the top killer of U.S. troops in Afghanistan – and a relatively vague but interesting article in USA Today suggests they may have found it. According to the article, the military has been testing a secret high-tech beam that bypasses the explosive triggers of IEDs to detonate their payloads prematurely in Iraq since 2005, but researchers still have a ways to go to make the device battlefield-ready.

There are few details available about the highly classified technology, about which the Pentagon is remaining silent. USA Today describes it as a beam which “bypasses the triggering device of an IED and detonates its explosive.” As such, it can not only be used to detonate explosives on the ground, but explosives that are still being built and transported by insurgents.

While the idea of leveraging technology to give insurgents a taste of their own medicine may sound attractive to military on the ground, it also opens the door to potential problems, namely the collateral damage caused when an unexpected explosion of indeterminate magnitude is triggered in the middle of a street. It’s easy to see how such incidents could quickly get crosswise with Gen. Stanley McChrystal’s mandate to reduce civilian casualties in Afghanistan.

Which brings military researchers to yet another problem – the countermeasure is reportedly huge, big enough in fact that a tractor trailer is needed to haul the thing around. It’s allegedly been tested at checkpoints in Iraq in both 2005 and 2008, but it’s highly cumbersome for mobile, outside-the-wire operations. In rugged terrain like that of Afghanistan, this presents a major logistical problem.

One U.S. Joint Forces Command official has suggested using the device from airborne platforms that could clear roadways ahead of convoys. In the meantime the Office of Naval Research, which developed the device, is looking to create a smaller, more mobile IED hunter.