Diagnosing racing thoroughbreds can be like diagnosing an engine problem in a car; it starts with a vibration that might... 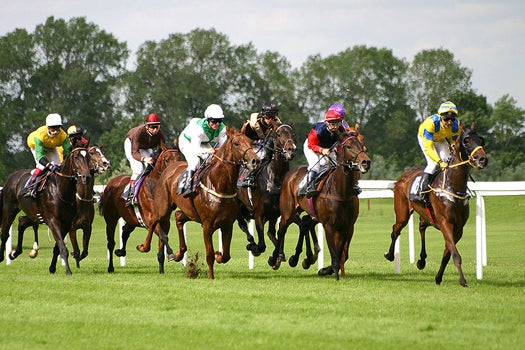 Using the same accelerometers used in smartphones, horse trainers should be able to detect lameness in horses much earlier. Softeis
SHARE

Diagnosing racing thoroughbreds can be like diagnosing an engine problem in a car; it starts with a vibration that might be imperceptible, but unchecked it can become a serious mechanical problem. It’s very hard to tell if a horse has a slight hitch in its gait, but Danish researchers think they’ve found an objective diagnostic tool in the same small accelerometers developed for smartphones.

Accelerometers, of course, are the tiny sensors that allow our phones to sense acceleration and orientation. They’re made of tiny piezoelectric sensors, three of which are arrange in right angles to one another. Each carries a tiny charge when compressed by a force like motion or gravity, giving it a keen sense of force in all three dimensions.

Healthy horses trot with symmetric gaits, and the researchers think an accelerometer placed at a horse’s center of gravity – along the top of its neck above the shoulders – should be able to detect an asymmetry in equestrian gaits. In a test on 12 healthy horses, the sensor accurately diagnosed their trots as symmetrical. The team now plans to run a tests on lame horses to see if deviations in that symmetry can be detected long before the eye can detect developing lameness.

If it works, the device could allow trainers to detect lameness before it worsens, getting them treatment before the condition becomes serious. If that works, it could be used to evaluate other gaits. Who knows? It might spawn a whole scientific field of racehorse evaluation rooted in objective math rather than hype, circumstance, and hope, taking all the fun out of your gambling problem.