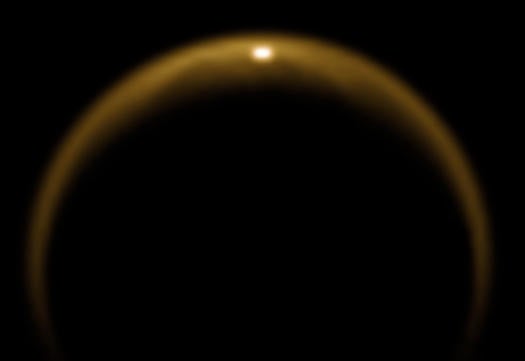 Cassini's infrared vision allowed it to peer through the clouds and catch the sunlight sparkling on one of Titan's lakes. NASA/JPL/University of Arizona/DLR
SHARE

On June 21, NASA’s Cassini spacecraft made its lowest dip ever into the atmosphere of Saturn’s largest moon Titan. The spacecraft’s 71st flyby of Titan took it to within 547 miles of Titan’s surface in an effort to assess whether Titan has its own magnetic field, which is important to understanding the moon’s interior and composition. The low-altitude flyby put Cassini in a region almost completely shielded from Saturn’s magnetic field, which makes it possible to detect a magnetic signature coming from Titan itself.

The flyby represented a mission milestone, and Cassini science team members put in more than 5,000 hours assessing the spacecraft’s ability to plunge so close to Titan’s surface. Over the past three and half years, the team ran hundreds of simulations to prepare for various scenarios, Spacecraft Operations Team Manager Julie Webster blogged on the Cassini web site. “We did more training for this event than anything else we had done since we dropped off the Huygens probe for a descent through the moon’s hazy atmosphere,” she said. The Huygens probe descended to Titan’s surface and landed on solid ground on January 14, 2005.

The night before the flyby, jittery team members had a tense moment when the spacecraft’s magnetometer (the main data collection instrument) alarm went off, but a computer reset cleared the alarm, and controllers verified that the instrument was ready for the close approach.

Although data from the flyby have yet to be fully processed, initial reports from the control team indicated that Cassini’s thrusters fired about twice as much as expected during the close flyby. “Titan’s atmosphere appears to be a little thicker than we expected,” wrote Webster. But even with the extra thrusting, the spacecraft stayed well within its safety margin.

Titan is the only known moon in the solar system with a fully developed atmosphere beyond just trace gases, and Cassini science team members will spend the coming weeks analyzing the data to learn how dense Titan’s atmosphere is. The Cassini Equinox mission is an extension of the Cassini-Huygens mission, which launched in 1997 and reached Saturn in July 2004, becoming the first space probe to orbit the planet.