Like an early, static version of Twitter, license plates have long allowed drivers to stamp a statement right onto their... 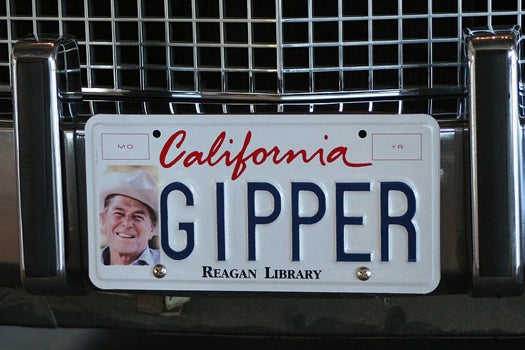 Like an early, static version of Twitter, license plates have long allowed drivers to stamp a statement right onto their bumpers, as long as that statement is of extremely limited length. But lawmakers in California are deliberating a bill that would allow electronic license plates that would display advertisements and other messages when cars are not in motion, turning every car on the road into a moving billboard.

When cars are moving, the electronic registration would display the usual numbered and lettered identifier. But when parked or stopped for more than four seconds in traffic or at a red light, the plate would display anything from advertising messages to emergency information or Amber Alerts.

For the highly insolvent state of California, such ad-bearing devices could generate a good deal of revenue. For drivers, they could generate a whole new source of distraction on our already media-saturated roadways. But in heavily gridlocked places like California, it could provide a fast means to disseminate important information quickly and even provide emergency instructions to drivers who regularly deal with natural disasters like mudslides, wildfires, and earthquakes. And don’t worry, Los Angelenos: You’ll still be able to advertise your ride as “SMOKN” in between the paid messages.