Technology developed by Virginia Tech for DARPA’s Urban Challengein 2006 and 2007 is heading off to war, joining the U.S.... 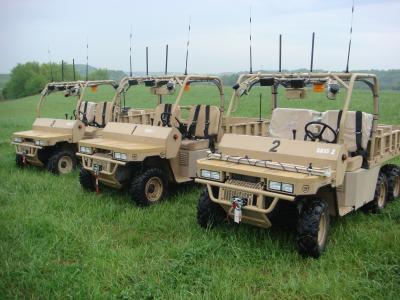 Technology developed by Virginia Tech for DARPA’s Urban Challengein 2006 and 2007 is heading off to war, joining the U.S. Marines and troops from 13 other nations at in Hawaii for the Rim of the Pacific (RIMPAC) war games next month. Aiding platoons of marines as they participate in the Naval Laboratory’s experimentation that accompanes RIMPAC, VT’s Ground Unmanned Support Surrogates (GUSS) will autonomously help grunts haul supplies, transport wounded, and carry out other platoon support tasks.

Four of the unmanned vehicles will join the 100 aircraft, 34 ships, five subs, and 20,000 personnel participating in RIMPAC. The off-road vehicles — which somewhat resemble hardier versions of those John Deere Gators used to haul injured players from NFL fields — can move 1,800 pounds at 5 miles per hour, about the pace of troops moving on foot.

But it’s not the vehicles themselves that are the crux of this system; the autonomous navigation system that VT’s Urban Challenge team developed for the Urban Challenge is getting its first big real world test at RIMPAC. The system earned third place in the 2007 autonomous vehicle race, completing DARPA’s 60-mile course in less than six hours all by itself. That system has been greatly improved over the course of three years, but it faces new challenges on the battlefield as it will have to negotiate tricky terrain, seamlessly switch between autonomous and remote control modes, and deal with rapidly changing mission objectives.

Developed in conjunction with TORC, a private company founded by alums of VT’s robotics program, the GUSSs are controlled via an interface known as WaySight that allows marines to command the vehicle in several modes. Using a one-pound handheld controller, marines can take remote control of the vehicles, give their autonomous nav systems new routes or objectives, or simply tell them to follow autonomously at a safe distance.

GUSS development and testing is part of an ongoing contract between VT and Navy researchers, so a successful test run could see these kind of autonomous pack mules move closer to becoming regular fixtures on future battlefields.