Airfish Blimp Moves Like a Trout, Uses No Engines

A new blimp built in Switzerland uses artificial muscles to glide through air as a fish moves through water, and... 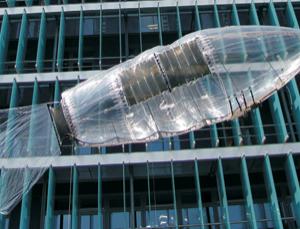 It's a bird! It's a plane! No, it's a fish!. IOP/EMPA via New Scientist
SHARE

A new blimp built in Switzerland uses artificial muscles to glide through air as a fish moves through water, and it doesn’t require engines or noisy propellers to do it.

The Airfish is about 26 feet long and looks like a giant flying trout. Airfish is filled with helium and made of special polymers that make it move.

The designers, led by Christa Jordi and colleagues from EMPA, the Swiss federal laboratories for materials testing and research in Dübendorf, replaced traditional motors with swaths of acrylic polymers on each side of the Airfish. The polymers connect to carbon electrodes, and when a voltage moves across them, the electrodes are attracted to each other, compressing the polymers. The Airfish is forced to flex like a contracting muscle. By alternating the voltages applied to each side of the vehicle, the team can make the ship shimmy like a fish. Membranes on the tail move it back and forth, too.

The team modeled the Airfish after rainbow trout because they’re versatile swimmers, but aren’t especially quick or agile. They programmed software to mimic the rhythm of the trout’s motion, and ran it on a computer attached to lithium-polymer batteries in the airship’s gondola, New Scientist reports.

The combined motion of the tail and the body make the Airfish move forward at roughly 1.5 feet per second, akin to a slow walking speed. Airfish studies are reported in the journal Bioinspiration & Biomimetics.

More work needs to be done to determine how the Airfish will act in certain windy conditions. But it’s so graceful and quiet that the researchers hope TV broadcasters might favor it for capturing footage of sporting events. Here’s to the Goodyear Airfish.