Airships of the future are getting a little closer to reality. A new time-lapse video shows the world’s largest airship... 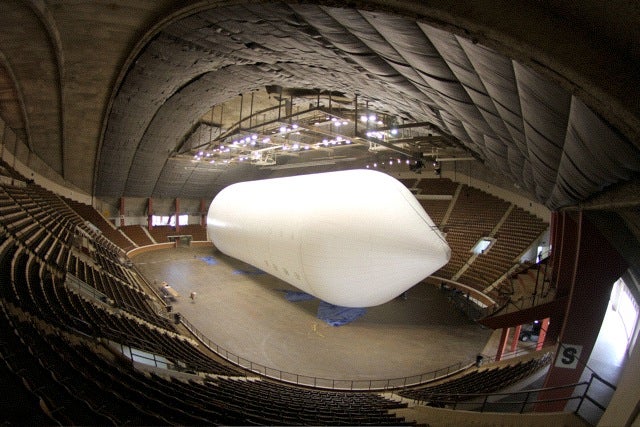 Airships of the future are getting a little closer to reality. A new time-lapse video shows the world’s largest airship being inflated in an Alabama cattle barn, and the ship’s manufacturer says it will be ready for test flights soon.

It took six hours to inflate it, but the video is condensed to about two minutes.

The Bullet 580 ship, measuring 235 feet long and 65 feet in diameter, is made of a thin type of Kevlar and will be able to fly at 20,000 feet, according to its manufacturer, E-Green Technologies. It will eventually carry a NASA payload that will study moisture content in soil.

The ship is maneuverable, meaning it can reverse directions and take off and land vertically. Its propeller fans are mounted along the center of the hull rather than under it, so its nose doesn’t bob up and down when more power is applied (think of those tipsy gift-dropping blimps at NBA games). The pilot can control the airflow emitted by the fans, so there’s no need for traditional rudders, as the Register points out. That also negates the need for ground crews using ropes.

E-Green also claims to have a solution for the helium problem. Helium makes the ship float, but because the ship gets lighter as it burns its fuel, some helium would have to be released for it to land. Helium is expensive, however, and it’s difficult and costly to replenish the gas for another flight. E-Green says the Bullet will have a Water Condensate Recovery System, but the company won’t elaborate on what that means.

Other airships, like Lockheed Martin’s P-791 use thrust or hover systems to make a landing without sacrificing helium.

The Bullet can be piloted or operated remotely. It can carry a payload of 15,000 pounds up to 2,500 feet, meaning the ships could be useful for heavy-lift transport at low altitude. Or, it can fly at 20,000 feet with up to 2,000 pounds of cargo. It can be outfitted with various instruments for surveillance or science. The ship will sell for $8 million, and E-Green plans to build an entire fleet that can be leased for $300,000 to $500,000 a month, Discovery News reports.