Boston Dynamics’ BigDog quadruped bot gets a lot of time in the spotlight it seems, but a new video shows... 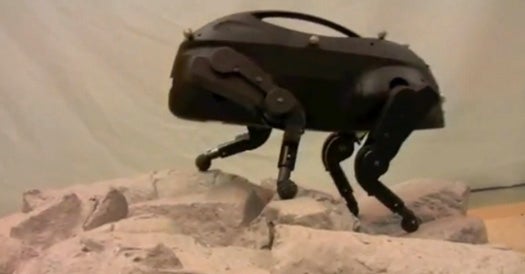 Boston Dynamics’ BigDog quadruped bot gets a lot of time in the spotlight it seems, but a new video shows its little brother has been making some serious strides in four-legged locomotion as well. LittleDog, a DARPA-funded project under development at USC, has learned how to evaluate seriously challenging terrain, negotiating gaps, unstable terrain, and difficult grades with ease and, dare we say, a little bit of grace.

Via its advanced robotics research, DARPA wants to provide a kind of workhorse for soldiers in the field that can hump supplies or even weapons systems anywhere a soldier can go. BigDog has shown a good deal of dexterity in this regard, climbing up and down inclines and even keeping its balance on ice. It’s also somewhat terrifying to watch in action, moving with a grotesque, unnatural gait.

LittleDog is learning to be a bit more graceful. Using a novel locomotion control system developed at the Computational Learning and Motor Control Lab at USC, LittleDog can now autonomously navigate challenging terrain by making real time decisions regarding what movements will be optimal for stability and control. The bot’s onboard sensors scan the terrain ahead, identifying and scoring potential footholds as it goes, allowing LittleDog to size up terrain before it steps rather than reacting to it afterward.

But LittleDog doesn’t just traverse the terrain; it learns as it goes, noting what works and what doesn’t and incorporating that knowledge into its foothold scoring system. And if the terrain simply becomes too tough? LittleDog has a few new moves up its sleeve that allow it to push the limits of its own physical capacity, like using its front legs to heave itself over a high obstacle. It’s even been trained in a few special recovery maneuvers that help it regain stable footing in the rare event that it slips and falls down.