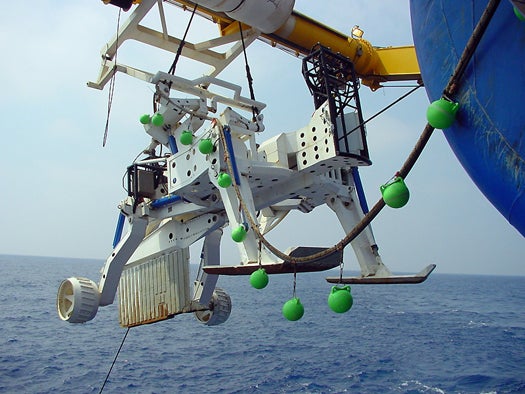 A submarine plow prepares to lay submarine cable under the seafloor. Sergio77
SHARE

It’s not just media pirates and cyber-villains that Web security experts are worried about today. Add Somali pirates, terrorists, saboteurs, and petty scrap metal thieves to the list. A report issued by the Institute of Electrical and Electronics Engineers (IEEE) says urgent action is needed to secure and diversify our undersea cables, as a malicious attack or accident could disrupt the very backbone on which the Internet depends, turning global commerce into chaos.

Undersea cables handle the overwhelming majority of our communications, carrying more than 99 percent of all data traffic across the oceans. Those cables pass through choke points – generally in places where larger bodies of water narrow, such as the Suez Canal or the Luzon strait between Taiwan and the Philippines. At such points cables are vulnerable, and damage to them could down entire phone networks or stymie data flow to entire regions.

While accidents have been known to cause problems in the past – commercial fishing and ship anchors dragging the seafloor have been known to disrupt cables – foul play could really put data networks in a bind. Cables have been stolen from the seabed for the valuable metals they contain, and as problems like piracy persist in areas like the horn of Africa, it becomes increasingly likely that the specialized ships that maintain the networks could become targets.

The IEEE wants new cables laid on more diverse routes so that so many important cables aren’t bottlenecked in certain regions. More importantly – and probably less likely – it wants to create a global body overseeing the world’s submarine cables, though the commercial interests of operators could trump cooperative efforts to govern the seafloor.

If pirates, thieves, or terrorists were able to compromise a major cable hub, the results could be pretty bad. Aside from disrupting all those torrents you’re piping in from foreign servers right now, international banking could grind to a halt for an extended period, and companies that rely on overseas employees or who service international customers could be placed on indefinite hiatus, wreaking havoc on global markets.