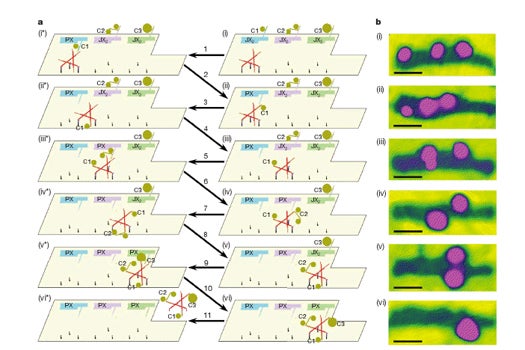 Nanotech has opened the door to some serious sci-fi possibilities: tiny robots — built by other tiny robots — that swim in our bloodstreams eradicating infection or hunting tumors, or perhaps assembling miniscule electronic components. But programming such tiny objects to do what we want presents a problem: commands need space to exist, and space is limited aboard a nanobot. But two papers just published in the journal Nature today highlight an interesting and promising approach to this problem: embedding the commands in the nanobots’ environments.

In one paper, researchers describe a “molecular spider” designed to perform a particular task, in this case walking along a certain, pre-programmed path. While traditional robots would rely on internal memory and processing to orient themselves toward their programmed goals, this spider gathers its commands from an environment that has been precisely defined by the researchers beforehand via nucleotides placed exactly where they want the spider to step.

A specially designed two-dimensional DNA origami landscape dictates the spider’s movements. The spider is made of an inert molecule body and three catalytic legs adapted from a specific DNA enzyme that binds to certain nucleotides. When they do so, they cleave the nucleotides into two smaller ones with weaker attractions, at which point the leg moves on to the next strong bonding nucleotide. Moving independently of one another, the legs will carry the spider along a preset path laid out by the researchers, one step at a time, making turns and following the proper nucleotide until a set of uncleavable nucleotides makes it stop.

Pretty cool, but can we make it actually do something? A second paper says we absolutely can. Using a similar DNA origami tile, three DNA controlled two-state “DNA machines” and a DNA walker like the molecular spider above (with four feet and three “hands” that carry cargo), researchers aimed to show that by integrating several simple nanobots, we can create more complex nanosystems that can actually build things.

Each DNA machine holds a different gold nanoparticle, which it will either hold onto or let go of depending on whether it receives an “on” or an “off” command from its DNA programming. As the walker traverses the tile, the machines either pass off their cargoes or they do not. Which means at the end of the line, the finished product can be one of eight different products assembled from the gold nanoparticles, depending on which particles were handed to the walker.

Do that over and over, and you’ve got an assembly line. Not only that, but a machine can be manipulated to produce different end results depending on DNA commands, making it as versatile, in theory, as a computer controlled macro scale assembly line.

This is an oversimplification of course. The science behind all this is complicated and not easy to duplicate, but both papers express exciting new methods to manipulate things at the nanoscale in ways that were once the realm of fantasy (think The Magic School Bus or Fantastic Voyage). While widespread application is still a ways out, the idea of very, very small things programmed to assemble even smaller things tailored to our precise designs is very cool science indeed.