Miniaturization has been no small force driving computer technology forward over the past five decades, and a group of Australian... 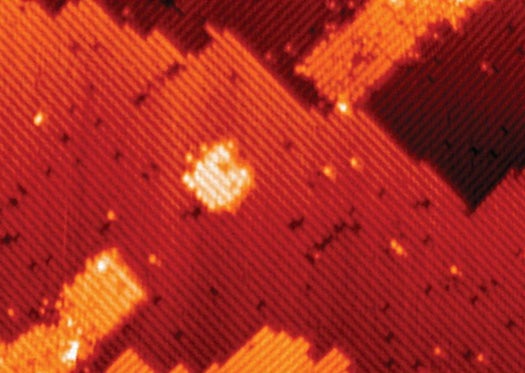 Miniaturization has been no small force driving computer technology forward over the past five decades, and a group of Australian researchers has proved just how small they think they can go. Using just seven atoms, scientists at the University of New South Wales working with researchers at the U. of Wisconsin have carefully constructed a quantum dot transistor, the smallest deliberately built electronic device in the world.

Even at its miniscule stature — the quantum transistor is about 4 nanometers long, versus 40 nanometers for commercial transistor gates — the working transistor can regulate or amplify the flow of electrical current. But the real promise isn’t in making smaller conventional electronics. Such technology brings researchers a huge step closer to creating a super-fast quantum computer that could dwarf the processing power of traditional semiconductor machines.

The team used a scanning tunneling microscope to precisely replace seven silicon atoms in a silicon crystal with seven phosphorus atoms. The result is an extremely tiny device that can nonetheless process electronic input from the larger world. It isn’t the world’s smallest transistor; single-atom transistors have been discovered (rather than built) that leverage the properties of quantum mechanics to allow electrons to pass through a single phosphorus atom for instance. But those are very hard to manipulate or integrate into an electronic system, whereas the seven-atom transistor is deliberately built with atomic precision and is manipulable from the macro.

The ability to move atoms around at such a level isn’t new. Scanning tunneling microscopes have been around for a couple of decades, and a couple of IBM researchers long ago showed that they could manipulate atoms, spelling out the company’s name in 35 xenon atoms nearly 20 years ago. But until now, no one has been able to manipulate atoms into working electronic components.

Of course, a quantum computer in silicon — the chief goal of the New South Wales team and fantasy of IT geeks everywhere — is still a ways off; a single transistor does not a computer make. But the demonstration of technology that can build devices on the scale of individual silicon atoms is remarkable to say the absolute least. The next challenges will be to find a way to produce working atomic components systematically in quantities that are useful, and figure out how to make other components of logic circuits and other devices that also function at the atomic scale.